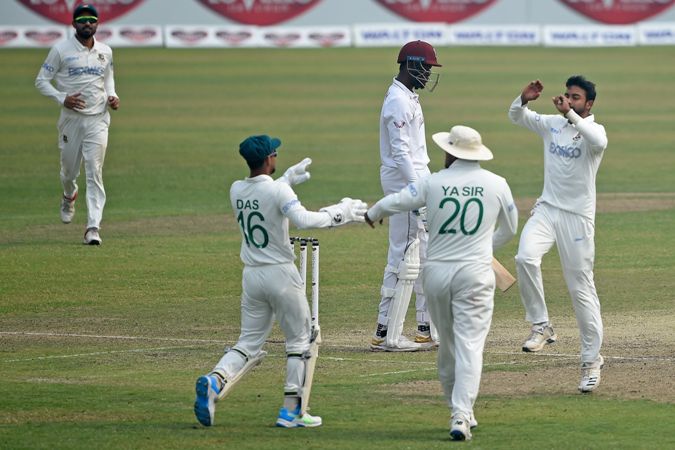 Superb batting display by West Indian batsmen helped the tourists post 409 in their first innings on the second day of Dhaka Test against Bangladesh.

Consistent performance by Nkrumah Bonner (90), Joshua Da Silva (92) and Alzarri Joseph (82) helped the Caribbeans take the driving seat in the second Test of Bangabandhu two-match series on Friday. The match is being played at Sher-e-Bangla National Cricket Stadium.

In the first session of day two, Bangladesh were able to take only one wicket when Mehidy Hasan Miraz pulled off Bonner. But after launch break, Taĳul Islam and Abu Jayed Rahi picked up the last four wickets.

Before getting all out, Alzarri Joseph and Joshua Da Silva added 118 runs in the seventh wicket stand, which was the highest-run partnership in West Indies’ innings.

Along the way, Joseph recorded his second fifty in Test. He ended up on 82 with eight fours and five sixes.

Mehidy and Soumya Sarkar took one wicket each.

Bangladesh started their first innings after the tea break of day two.

West Indies won the first Test by three wickets riding on the double-ton by Kyle Mayers. Along the way, he became the first batsman in history to hit a double-ton on debut in the fourth innings of a Test match.