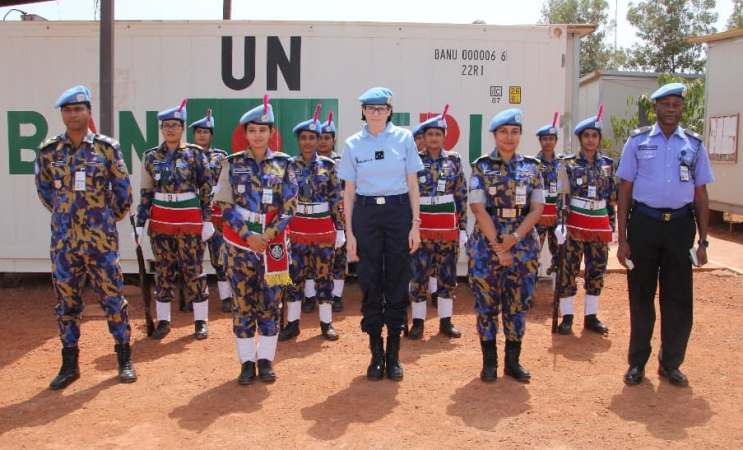 This was her maiden visit to any FPU in MINUSMA.

During the visit, the Police Commissioner took salute presented by a smart and nicely turned-out section of female officers, visited the Commander's office, and put her comment in the unit's Inspection Book.

Later she attended a briefing on the unit which was presented by the unit’s Operations Officer Addl. SP Ahmad Mainul Hasan.

FPU Coordinator Samuel Shugaba Hammanjabu addressed the unit for successfully settling and adjusting in the mission.

He also urged the officers and force members to take on the challenges and assist the police component in implementing its mandate.

In her speech, the Police Commissioner touched upon all MINUSMA-specific issues including the UN zero tolerance policy on SEA.

She advised the unit members to maintain protection measures against COVID-19 and hailed the leadership for successful enforcement of the same.

Police Commissioner also hailed the initiative of the Police HQ, Bangladesh for doing regular online conferences, saying such initiatives would be very useful in solving the problems faced by the unit.

Commander of the unit SP Belal Uddin thanked Police Commissioner for choosing BANFPU-1 as the first FPU for launching her FPU visit program.

He also reaffirmed the unit’s commitment in implementing MINUSMA mandate.