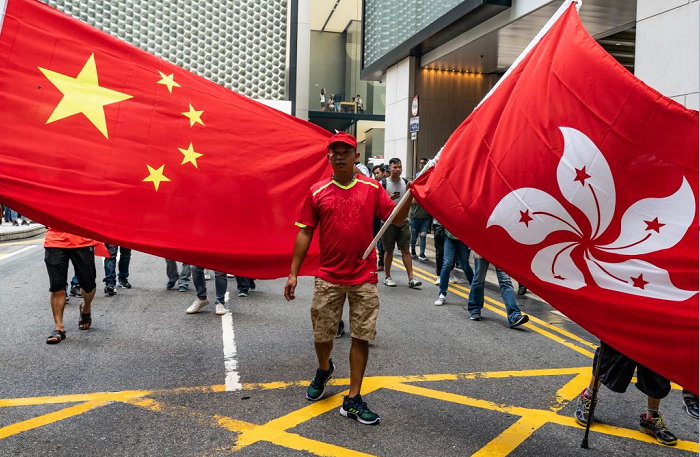 In yet another crackdown on the people of Hong Kong, the city’s Education Bureau (EDB) has introduced new regulations for how schools should operate.

This comes months after China imposed its draconian National Security law in the city.

According to a circular issued to schools last week on Thursday, the EDB said that “as far as national security is concerned, there is no room for debate or compromise.”

The new policies are outlined in a series of circulars as well as new teaching materials, including videos, picture books, and graphics, with cartoon Chinese soldiers and local police officers helping students understand their “responsibilities” under the National security law.

They go into “granular detail” over how national security issues “should be taught across a range of subjects” as well as how administrators and teachers should handle discipline issues and failure to respect the new guidelines.

According to reports, both teachers and students who go against the rules face potential censure, with administrators advised to involve the police in the event of “serious” offenses, while books and other materials deemed to be contrary to national security are to be removed from school grounds.

“If an employee is found to have committed any act of disrespecting the country, the school should give appropriate advice or warning, and pay attention to this employee’s future performance accordingly,” the rules state.

Ip Kin-yuen, a former lawmaker and vice-chairman of the Professional Teachers’ Union, criticised the government for announcing the new policies without consulting teachers and parents.

“There is a lot of sensitivity and unpredictability when it comes to national security law education,” he said. “It will bring about huge pressure and anxiety among principals and teachers.”

Students, both university and high school, were at the forefront of pro-democracy protests which rocked Hong Kong in 2019.

During the unrest and in the run-up to the national security law being introduced, many pro-government figures blamed the city’s liberal education curriculum, as well as teachers, for supposedly radicalising the city’s young people.

As per media reports, Kindergartens — both private and public — will be forced to instill in their students a greater knowledge of “Chinese history, Chinese culture, and moral education,” which the guidelines claim will “gradually build up students’ identity as a Chinese and thus lay the foundation for national security education.”

Starting from the age of 6, all students in the region will receive new lessons aimed at helping them “understand the country’s history and development, the importance of national security, the national flag, national emblem and national anthem.”

Primary school students will be instructed in singing the national anthem and raising the flag, while older children will discuss the rationale behind the law itself, and the importance of institutions such as the People’s Liberation Army.

The international schools are also not being exempted from the new guidelines issued by the Chinese government.

While private educational institutions are not directly under the control of the education bureau, the rules issued on Thursday stated that international and private schools “have the responsibility to help their students (regardless of their ethnicity and nationality) acquire a correct and objective understanding … of the concept of national security and the National Security Law, as well as the duty to cultivate a law-abiding spirit among their students.”

Recently, the UK launched its resettlement program for holders of British Nationals (Overseas) passports, of which there are an estimated 3 million in Hong Kong. Beijing has reacted angrily to the plan and said it will no longer recognise BN(O) documents, but still an estimated 300,000 people are expected to relocate to the UK.

The draconian security law imposed by Beijing on Hong Kong criminalises any act of secession (breaking away from China), subversion (undermining the power or authority of the central government), terrorism, and collusion with foreign forces, with punishments of up to life in prison. It came into effect from July 1, 2020.