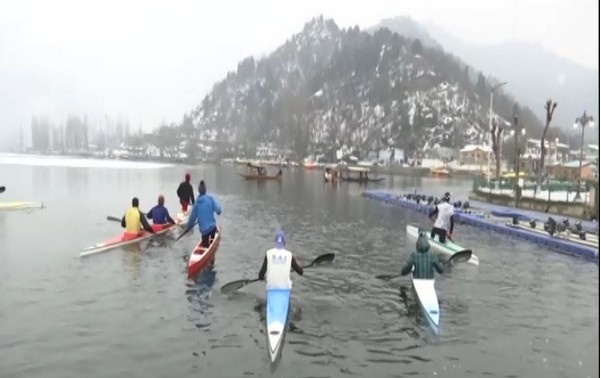 Despite the chilly winter, a water sports coaching camp, aimed at preparing players for a national rowing championship scheduled to be held on February 20 this year, is in full swing in Srinagar of India.

The coaching is being conducted at the sports training center at Nehru Park, and the participants are being made to practice in the Dal Lake, the maximum portion of which is frozen amid minus temperature in Srinagar.

Talking about the coaching camp coach Bilques Mir told ANI, “Our national competition starts soon in Bhopal and we have to practice irrespective of the frigid weather. We need to perform and excel and if we talk about water sports then Jammu and Kashmir are doing good in water sports at the national level.”

“Because of the pandemic, sports activities were affected which disappointed sportspersons. It is very important to keep the players active and maintain their fitness. We measure the efficiency of each player and prepare targets for them then only these players are able to achieve something nationally and internationally,” she added.

A player said, “A player is always a player, and temperatures and weather do not matter to them. The temperature is in minus and Dal Lake is frozen still we are practicing. Some portion of ice on the frozen Dal lake has to be broken before we take our boats to practice. We also undergo indoor rowing practice.”

Another player thanked the coach for assisting them in practicing in harsh climatic conditions, adding that the participants are first made to warm up and workout and then practice rowing in the Dal Lake.

“We are practicing for the upcoming national championship scheduled to be held in Bhopal. We aim to win a medal in the competition, therefore, we need to perform with excellence for which practicing is very important,” added another player.