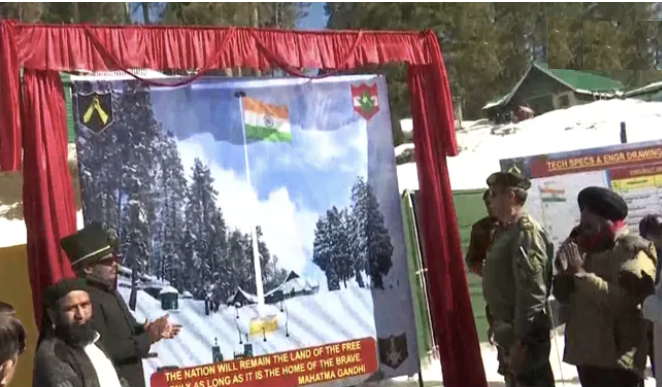 "An iconic 100 ft tall national flag will be installed in this place. This development is in sync with the large number of endeavours that have contributed to peace and stability in Kashmir," General Officer Commanding (GoC) 19 Infantry Division of Kashmir, Major General Virendra Vats said.

"I believe that this national flag is more than just a flag. It represents the dreams, hopes and aspirations of more than 100 billion people across the globe. It will add to the glory and splendour of Gulmarg and we hope to witness a large number of tourists," Mr Vats said.

"We hope to continue to inspire to serve this nation. I would like to thank our partner Solar Group for this patriotic endeavour. Thank Vidya Balan and Siddharth Roy Kapoor and Arbaz Khan who have chosen to grace this occasion," Mr Vats said.
This project is sponsored by Solar Industries India Ltd. The Indian Army along with this solar company aims to promote Atmanirbhar Bharat and has placed an order for 1 million multi-mode hand grenades at Gulmarg.

Speaking to news agency ANI, Senior Executive of Solar Industries India Limited, Ramit Arora said, "Big accomplishments start from small things. This symbolic and iconic flag will be put up in Kashmir valley. The Indian Army approached us to sponsor this. It is indeed a noble endeavour. This flag is dedicated to the people of Kashmir and entire India."

"Today, we just laid the foundation stone of this project. Once completed, I believe the place will attract many tourists in the region," Sub-Executive of Solar Industries India Ltd Pankaj Dhar told ANI.

The snow-covered mountains of Gulmarg have always been a major tourist attraction, and the Indian Army along with the Solar Industries India Limited have come together to boost the same.