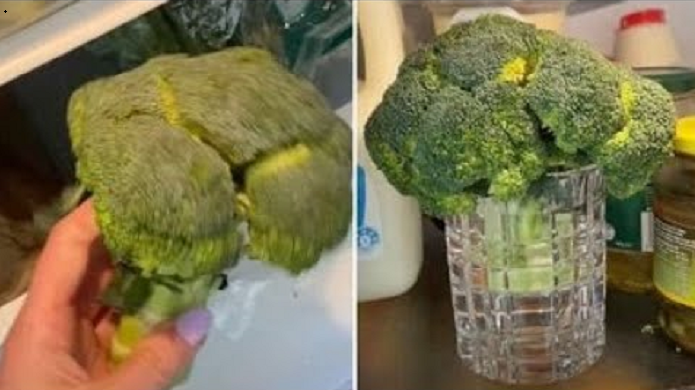 Ok, we'll admit it... sometimes we get a little bit carried away at the supermarket and end up buying more than we really need.
This in turn means that not all the food always gets eaten before it starts to go off.

But that doesn't mean we have to be wasteful.

A TikTok user has gone viral on the social media platform after showing users how they can make wilted vegetables such as broccoli "good as new" again.

Alesha Ruddenklau was praised by viewers for sharing the "magic" and "game-changing" life hack, with many people admitting they were disappointed they hadn't known about it sooner, as it could have prevented them from throwing out a lot of produce in the past.

In the clip, Alesha goes to her fridge and picks up a head of broccoli.

She shows how the vegetable has wilted, looking less green than it should and being very floppy.

To fix this, she simply places it on a cutting board and slices off a bit of the large stalk at the bottom.

The remaining broccoli is then placed in a cup of water and left for an hour or two and when she takes it out of the cup, the veg has regained colour and is much firmer-looking.
The video went viral, being watched over 280,000 times and garnering more than 40,000 likes.

One person commented: "Seriously? I mean seriously? This should be shown on tonight's news."

"This is magic and you are a wizard Harry," proclaimed a third.

Someone else said: "My chickens are going to be so mad that I won't be throwing out as much produce to them!"

A different user proclaimed it was a "game-changer" while a sixth added: "You can do this with basically almost every vegetable".
This comes after a different TikTok user shared a food 'hack' for serving spaghetti bolognese and garlic bread.

Laura Rowan explained that when eating spaghetti, she likes to pile it up on top of her garlic bread and after a while of doing this, she had an idea to combine the two properly and thus she created the spag bol garlic bread pizza.

The first step is to cook your pasta and bolognese and when it's almost ready, place a garlic flatbread in the oven and cook as per instructions.

When it's done, remove from oven and top with the cooked pasta and sauce. Cover the whole thing with grated cheese and pop back in the oven until the cheese has melted - and voilà.

Many people were keen to try it for themselves, with one saying: "We are gonna try this one next. How good does this look!"

Another commented: "Why have we never thought of this?"