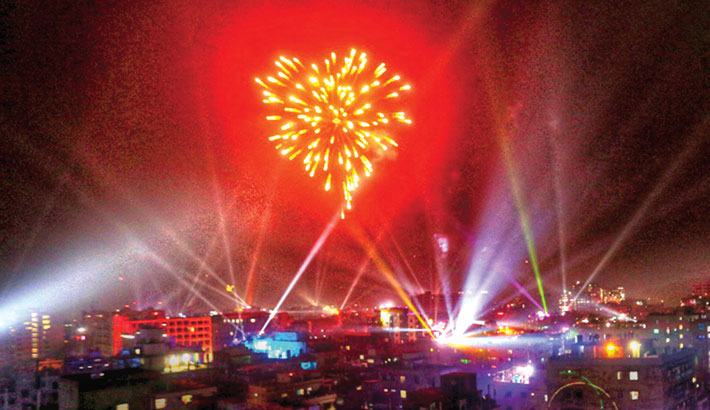 It was around 9:00pm on January 29 when East Badda of the capital was shaken by a series of unbelievably loud bangs.

Many residents were looking through windows to see what was happing. They later discovered that loud noise was from fireworks set off from a community centre to welcome wedding guests.

Like the residents of the area, residents of other parts of the capital and elsewhere of the country are sometimes shaken with such loud bangs, especially on Thursday and Friday when social functions, including wedding parties, are arranged.

Use of fireworks has become a way of celebrating special occasions for a section of the young generation, but it caused at least 122 fire incidents across the country in the last two years, burning many houses and establishments to ashes, according to data from the Fire Service and Civil Defence (FCCD).

The Explosives Act-1884 has banned coloured fires (fireworks) every such substance. Besides, the Dhaka Metropolitan Police (DMP) imposed a ban on flying fanus (paper lantern) in 2018.

In addition, the DMP usually bans fireworks during the New Year celebration.

But the use of fireworks has become more widespread over the years, increasing the risk of fire accidents and causing sound pollutions.

Abul Kalam Azad, chief inspector of Department of Explosives, told the Daily Sun that they did not permit anybody to produce and sell firecrackers and fireworks.

He said that they have recently sent letters to deputy commissioners and superintendents of police of all districts to take action against the production, sale and use of firecrackers and fireworks.

Wishing not to be named, a senior officer of the Department of Explosives said crackers can be used in any big programme after taking prior permission from the department. In the case of permission, the department imposes some conditions.

But sound bombs, fanus and similar things are totally banned, the officer said.

Debashis Bardhan, deputy director of Dhaka Division of the Fire Service and Civil Defence, told the Daily Sun that a number of fire incidents occurred at night of December 31 last year due to fireworks.

The officer said a firework is a device containing gunpowder and other combustible chemicals, which causes explosion and sparks.

When sparks come to touch with any flammable substance, it causes fire incident, he said.

Sometimes, live lamps are used in fanuses. When the live lamps fall in any flammable thing, fire breaks out, he also said.

The officer said that like the English New Year celebration, the old Dhaka residents observed Shakrain Festival from January 14 to January 15.

“Thousands of fireworks were displayed in the sky on the days. The old Dhaka is housed with various chemical and plastic material storehouses and other flammable substances. The display of the fireworks is very risky for the residents as fire breaks out for the fireworks,” he said.

On January 12, a total of 83 businessmen and house owners submitted a letter to the commissioner of Dhaka Metropolitan Police, requesting him to ban the use of fireworks during Shakrain Festival.

In the letter, the landlords mentioned that a fire broke out at a multi-storey building at Elephant Road due to a fanus. The letter also informed that a fanus got stuck with a live electric wire there.