Tigers’ seven-wicket shy of a victory 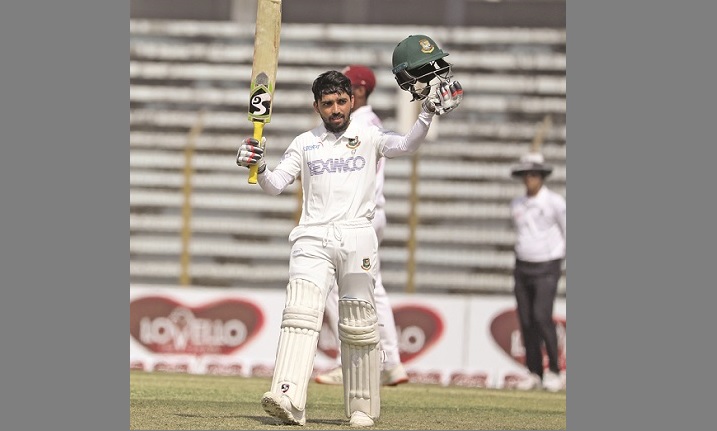 Bangladesh skipper Mominul Haque celebrates after scoring a century during the fourth day of their first Test against West Indies at the Zahur Ahmed Chowdhury Stadium on Saturday. – BCB Photo

West Indies ended the fourth day on 110-3 from 40 overs after Bangladesh declared their second innings on 223-8 and set up a target of 395 runs for the visitors at the Zahur Ahmed Chowdhury Stadium.

Bangladesh will be the favourites to pick the remaining seven wickets in the stipulated 90 overs as the Caribbean side, who are trailing by 285 runs, have a tough nut to crack on the fifth day.

Mominul scored 115 runs while Liton Das struck 69 that guided Bangladesh to give a mammoth target for West Indies after the duo added 133 runs for the fifth wicket, which is the highest partnership in this Test so far.

The Tigers, who got a massive 171-run lead in the first innings, resumed the fourth day’s play on 47-3 but lost Mushfiqur Rahim early when he was trapped leg-before by Rahkeem Cornwall (3-81) for 18.

Mominul completed his seventh Test hundred at the port-city venue with a single off Cornwall and it helped him surpass Tamim Iqbal (nine) and now he has scored most Test tons (10) for Bangladesh in the longer-format.

Liton lost his wicket to accelerate the scoreboard and he gave a catch to Kyle Mayers while trying to play reverse sweep after completing his sixth Test fifty.

The wicketkeeper-batsman was followed by Mominul as he was dismissed while trying to score some quick runs and took the aerial route against Shannon Gabriel only to get caught at the edge of the boundary ropes by Kemar Roach.

Jomel Warrican (3-57) took the wickets of Taijul Islam (three) and Mehidy (seven) in the same over and Mominul signalled the declaration straightway.

Mehidy started the demolishing act soon but visitors ensured that they didn't roll over despite the turns and some balls were kept low and a couple exploded from the foot-marks.

Mehidy took all three wickets for 52 runs to take his wicket tally in the match to seven and he needed just three more wickets on the final day to become only the fourth cricketer to score a hundred and pick 10 wickets in the same Test.

Both openers- Kraig Brathwaite (20) and John Campbell (23) got starts and so did Sheyne Moseley (12) but they were undone by a combination of good catching and the vagaries of the pitch.

Mayers (37 not out) and Nkrumah Bonner (15 not out) had shown plenty of positive intents and remained unbeaten at the close of the day’s play.

Shakib Al Hasan did not bat in the second innings and he is unlikely to take further part in the match due to a thigh injury.

Tamim and Shadman Islam both suffered some injury problems during the fourth day’s play as Tamim left the field after injuring him while trying to take a catch.

Shadman too left the field and his body language suggested that he is having some issues in the groin.