Myanmar coup: Does the army have evidence of voter fraud? 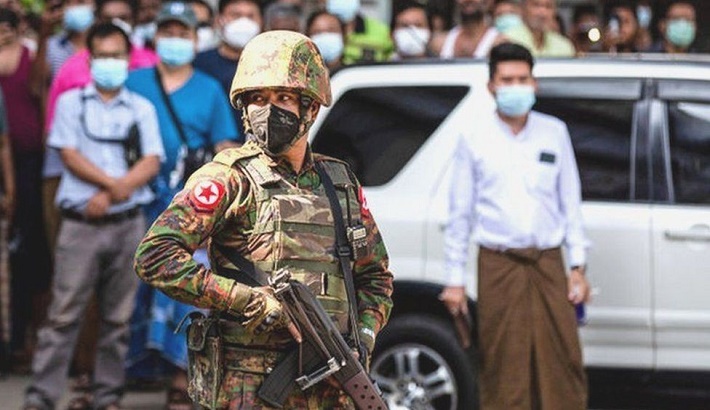 A military coup fuelled by allegations of electoral fraud has led to the removal and arrest of Myanmar's democratically-elected leaders.

The army's move has been condemned inside and outside Myanmar, also known as Burma, but do its claims about voter fraud stand up to scrutiny?

What has the army said?

In the days before the coup, the military declared that more than eight million cases of potential voting fraud had been uncovered relating to the 8 November election.

Aung San Suu Kyi's National League for Democracy (NLD) won a landslide victory with more than 80% of the seats at stake.

"There was terrible fraud in the voter list during the democratic general election," General Min Aung Hlaing announced on TV after seizing power. The country's election commission failed to address their findings, says the army.

Independent observers agree there may have been significant errors in the voter rolls, but no evidence that people actually committed electoral fraud has been presented.

The commission has also pushed back, saying there is no evidence to support the army's claims.

The US-based Carter Center, which had more than 40 observers visiting polling stations on election day itself, said voting had taken place "without major irregularities being reported by mission observers".

What fraud is alleged to have taken place?

Central to the military's claims are the voter lists, on which a person's name must appear so they can take part in the election.

These are compiled by local administrators and are based on previous election lists and other official data.

A draft was released in the summer of 2020 and an amended one again in October, which led to a period for corrections to be issued. The final lists were posted outside polling stations.

The military claims to have found widespread inconsistencies and many cases of ineligible voters.

In the evidence it has presented so far, it says there are nearly 10.5 million instances of irregularities.

The military says it aggregated lists from different towns and then identified entries where the national registration number had been repeated - either under the same or a different name.

It says it found others without a national registration number at all.

We have not been able to verify this data independently because the final voter lists were removed from public view after the election, and the election commission has withheld the data, citing privacy concerns.

The army claims these lists reveal instances where it is possible the same person could have voted more than once - by being registered in different places.

However, the national election commission says this would not have been possible because there were effective safeguards in place.

"These persons could not cast their votes many times in a single day," it said in a statement, pointing to the indelible ink administered to voters' fingers, which lasts at least a week.

Indelible ink is used in many elections around the world, and in Myanmar was provided by the United Nations and Japan.

The dye contains silver nitrate which stains the skin on exposure to sunlight and is described as "resistant to attempts to remove it using water, soap, liquids, home-cleansing, detergents, bleaching product, alcohol, acetone or other organic solvents".

The election commission also pointed to strict Covid-19 travel restrictions, which would have made it particularly hard to vote in multiple locations.

These restrictions may also have distorted the lists in some areas, with voters registering outside their usual locality, unable to return home.

Myanmar begin implementing restrictions on travel as Covid cases began to increase in the second half of 2020.

This, says one local election monitoring group, Phan Tee Eain, may have resulted in "inflated" lists in some areas because "they couldn't go back due to Covid".

It could have meant names appearing more than once on the overall voter lists. But there is no evidence that this led to deliberate acts of multiple voting.

This was used to cast doubt on people's right to vote, although it's not been clarified how this might have happened.

It's possible to get on the voter list without official ID on the recommendation of local officials in an area, according to the election commission.

These officials must certify in a letter that someone is a local resident.

However, it's unlikely this would by itself account for 4.6 million discrepancies.

The ID card itself is also not required at the polling station if citizenship can be demonstrated with another form of documentation.

It's important to note that the national registration card is not available to everyone in the country, like the Rohingya minority in Rakhine state, who were largely disenfranchised.

Voting was cancelled in some areas here, and in other regions which are home to minority groups, with officials citing security issues.

Errors and omissions but not widespread fraud

It's not the first time there have been issues over voter lists in Myanmar.

In 2015, when Aung San Suu Kyi's NLD also won a big majority, there were questions raised about the integrity of the voter lists, including people whose names were missing just a week before the vote.

It was also known that in the months before this latest election in Myanmar, there were mistakes on the electoral roll.

But clear weaknesses in voter registration in a poor country with fractured bureaucratic systems do not amount to deliberate fraud on the scale alleged by the military.