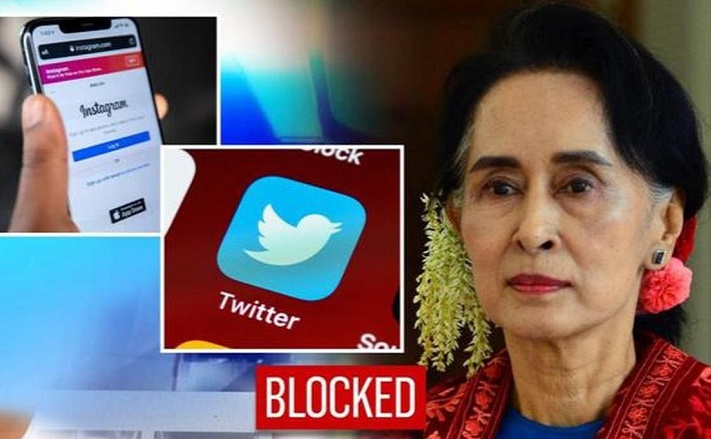 Twitter and Instagram have become the latest social media sites to be blocked for users in Myanmar following Monday's coup by the military.

Telenor, one of the country's main internet providers, confirmed it had been ordered to deny access to the two sites "until further notice".

The coup leaders blocked Facebook on Thursday for the sake of "stability".

There has been a growing movement of civil disobedience over the detention of democratically-elected leaders.

University teachers and students gathered in Yangon on Friday to chant support for the country's de facto leader, Aung San Suu Kyi, and other senior members of her National League for Democracy (NLD) party.

Ms Suu Kyi is under house arrest, according to her lawyer. Police documents show she is accused of illegally importing and using communications equipment - walkie-talkies - at her home in Nay Pyi Taw.

Why has social media been blocked?

Many Burmese had watched the 1 February coup unfold in real time on Facebook, which is the country's primary source of information and news. But three days later, internet providers were ordered to block the platform for stability reasons.

Following the ban, thousands of users were active on Twitter and Instagram using hashtags to express their opposition to the takeover. By 22:00 local time (15:30 GMT) on Friday access to those platforms had also been denied.

There was no official word from the coup leaders but the AFP news agency said it had seen an unverified ministry document that said the two social media sites were being used to "cause misunderstanding among the public".

Norwegian telecoms provider Telenor expressed "grave concern" at the move and said it had "challenged the necessity and proportionality of the directive... and highlighted the directive's contradiction with international human rights law".

A spokeswoman for Twitter said it had undermined "the public conversation and the rights of people to make their voices heard", Reuters reports.

How are Burmese reacting to the coup?

Myanmar, which is also known as Burma, has remained mostly calm in the aftermath of the coup.

But there have been a number of demonstrations in different parts of the country, with residents in some cities conducting nightly protests from their homes, banging pots and pans and singing revolutionary songs. There have also been daytime flash mobs.

At Friday's demonstration in Yangon, hundreds of teachers and students displayed the three-finger salute - a sign that has been adopted by protesters in the region to show their opposition to authoritarian rule. "We will not let our generation suffer under this kind of military dictatorship," student Min Sithu told AFP.

The BBC's Nyein Chan in Yangon says the Burmese know very well the violent crackdowns the military is capable of, so for now there are no widespread street protests. But now people have had time to digest what is happening, they are finding different ways to fight back and get their voices heard.