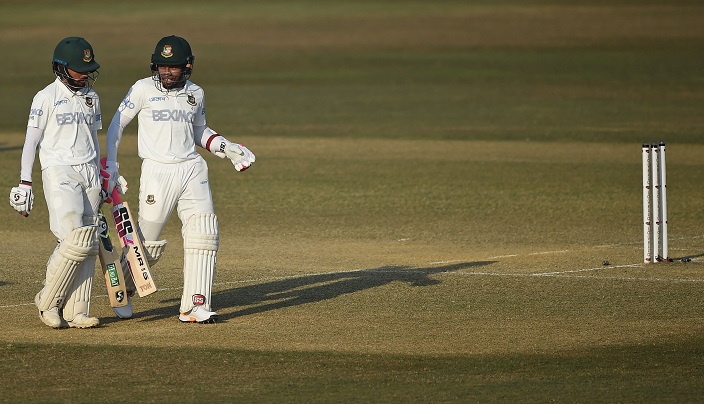 Mushfiqur Rahim with captain Mominul Haque walks back to the pavilion after end of the play. AFP Photo

Bangladesh left-arm spinner Taijul Islam said that they would need at least 300 to 350 runs lead to challenge West Indies in the fourth innings in the two-match series opener in Chattogram.

Tigers have already earned a substantial 218-run lead with seven wickets in hand against West Indies as they bundled out the visitors for 259 runs in their first innings.

Bangladesh, who earlier made 430 runs, got a 171-run first-innings lead but they lost three quick wickets to get reduced to 47-3 at stumps of third day’s play.

“In my opinion, anything beyond 250 is a good target on this wicket but still we have to bowl a lot better than the first session if we want to win this match. We need to be consistent in the second session as it was a lot better. Still, I'd personally prefer a lead around 300-350 runs,’’ Taijul said after the end of third day’s play.

“This is obviously a spin-friendly track. It is our own fault that we were unable to be consistent with our bowling, picking the right spots. I personally feel the first session wasn't good for us. We could have picked up more wickets if we bowled more to the right places,” he added.

Jermaine Blackwood, who scored 68 runs and put up a 99-run stand for the seventh wicket with Joshua De Silva which brought some resistance in West Indies first innings, said that they are ready to give a fight in the fourth innings.

“We have to take it hour by hour, session by session. Once it comes down to that, the guys are very much up to it. I know Kraigg, John Campbell and Bonner are hungry for runs.

“I know the guys like Meyers and Moseley want to get some runs under their belt as well. Once the opportunity presents itself to win, we will certainly go for it,” he added.