Tigers lose momentum despite 200-plus lead 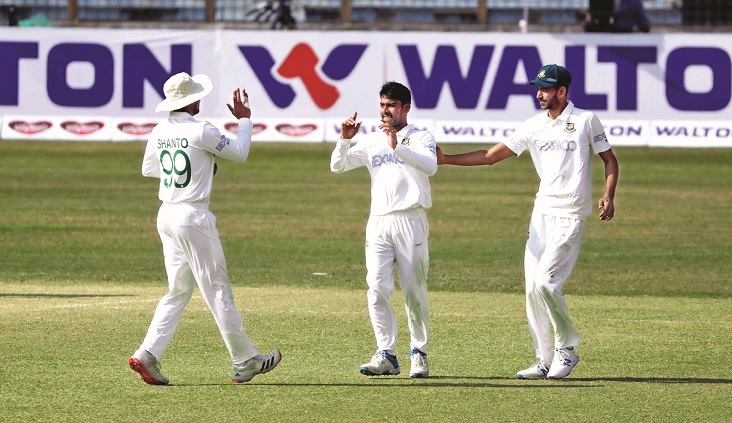 Bangladesh failed to finish the third day on top despite taking a substantial 218 runs lead with seven wickets in hand in the second innings against West Indies at the Zahur Ahmed Chowdhury Stadium on Friday.

Tigers could not capitalize on the 171-run first-innings lead after dismissing West Indies for 259 runs in their first innings as they lost three wickets in the final session and finished the day at 47-3 after 20 overs.

Tamim, whose tips helped Mehedy Hasan to notch his maiden Test hundred, seemed to be lacking confidence as he opted to give Shadman Islam the strike in the second innings.

But it hardly paid dividends as he was out for a duck for the 33rd time in his international career, joint-most for a Bangladeshi cricketer alongside Mashrafe Mortaza.

Tamim referred to his decision when he was given out after he was trapped in-front by Cornwall but the third umpire upheld the original call.
Things got worse when promising Najmul perished without opening his account.

Shadman, who scored a patient half-century in the first innings, managed to survive 42 balls for his five runs before he gave away his wicket to Shannon Gabriel’s relentless short pitch bowling as he deflected a short one to wicketkeeper Joshua Da Silva.

If Bangladesh’s batting unit looked out of sorts, their performance as a fielding unit also was nothing but clumsy as West Indies batters showed great resilience after losing Nkrumah Bonner’s (17) wicket in the very first ball of the day.

Skipper Kraigg Brathwaite (76) brought up his half-century and Kyle Mayers also batted positively for his 40 but both were dismissed in the first session by Nayeem Hasan and Mehidy respectively.

Jermaine Blackwood and Joshua then added 99 runs for the sixth wicket and were looked fearsome against Bangladeshi bowlers but both batters departed just before the tea-break to lose their control in the match.

Bangladeshi bowlers needed only 19 balls to sweep the West Indies tail as the visitors ended up losing their final five wickets for just six runs, well short of the hosts’ first innings score.

Joshua faintly edged one to wicketkeeper Liton Das, after carefully playing 140 balls and scoring 42 runs and he was followed by Blackwood soon as he edged the ball to Liton while trying to glance a ball straying down the leg side after scoring 68 runs.