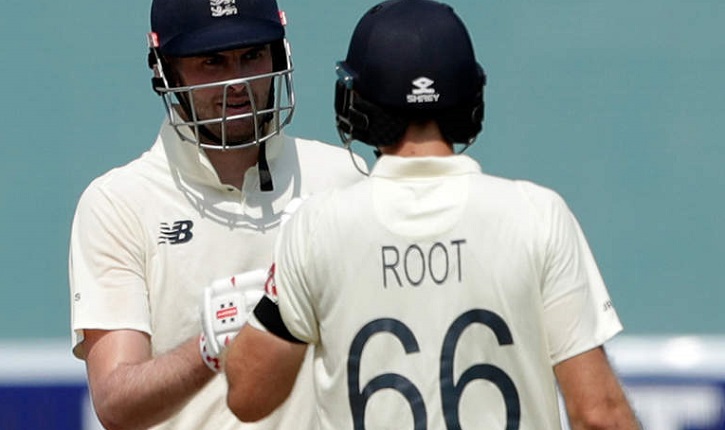 Dom Sibley and skipper Joe Root, playing his 100th Test, steered England to 140 for two at tea with a promising partnership in the opening match against India on Friday.

Root, on 45, and Sibley, on 53, put on 77 runs for the unbroken third wicket after England lost two quick wickets at the end of the first session in Chennai. England elected to bat at the start of the four-Test series.

Sibley completed his second successive Test fifty to gain confidence after a cautious but steady start with opening partner Rory Burns. The pair put on 63 runs.

Root, who made his Test debut in India in 2012 and is playing after match-winning knocks of 228 and 186 in Sri Lanka, looked assured against spinners and used the sweep and the reverse sweep to good effect.

Burns, a left-hand batsman, fell to off-spinner Ravichandran Ashwin for 33 while attempting a reverse sweep just before lunch.

Paceman Jasprit Bumrah, who is playing his first Test at home, struck soon after to trap new batsman Dan Lawrence lbw for nought.

Wicketkeeper-batsman Jos Buttler received his 50th Test cap from the captain, who got his 100th cap from the returning Ben Stokes, before the game.

The series, which is India's first at home in the coronavirus pandemic after an aborted tour by South Africa in March, will decide who plays New Zealand in the final of the inaugural world Test championship.