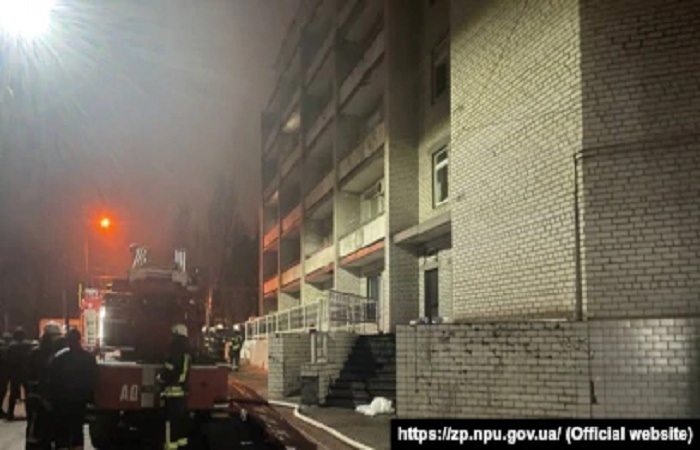 Four people died in Ukraine after a fire tore through the intensive care unit of an infectious diseases hospital that was treating coronavirus patients, police said Thursday.

It was the latest in a spate of deadly fires in Ukraine, which are not uncommon in the ex-Soviet republic due to poor compliance with safety regulations and ageing infrastructure.

The fire broke out just before midnight on Wednesday on the ground floor of the five-storey building in the southwestern city of Zaporizhzhya.

Footage released by the emergency services showed firefighters entering the smoke-filled building in darkness and carrying out bedridden patients.

"The fire killed four people, including a medical worker," regional police said in a statement.

The other three victims were patients who had been diagnosed with coronavirus and were on ventilators, according to the regional governor quoted by the Interfax-Ukraine news agency.

Firefighters were able to save eight people. including two hospital staff who were hospitalised with burns, the hospital's chief physician Volodymyr Shynkarenko was quoted as saying by the 061.ua local news website.

The cause of the fire was not immediately known but Shynkarenko confirmed that medical equipment had caught fire.

The general prosecutor's office said that the official responsible for the facility's fire safety was detained.

President Volodymyr Zelensky expressed his "sincere condolences" to the families of the victims and sent Health Minister Maksym Stepanov to the scene, the presidency said in a statement.

"Saddened to hear of the tragic fire... My deepest condolences to those who have lost loved ones," Hans Kluge, the regional director for Europe at the World Health Organization, said on Twitter.

The regional governor said that on Friday the Zaporizhzhya region will observe a day of mourning for the victims of the blaze.

In January, 16 people were killed in a fire at an illegal nursing home in the eastern Ukrainian city of Kharkiv.

In December 2019, a fire killed 16 people and injured 30 at a college in the Black Sea city of Odessa.

Seventeen people died in May 2016 when a makeshift home for the elderly outside the capital Kiev caught fire.