Chennai couple dive to say ‘I do’ 60 feet under ocean 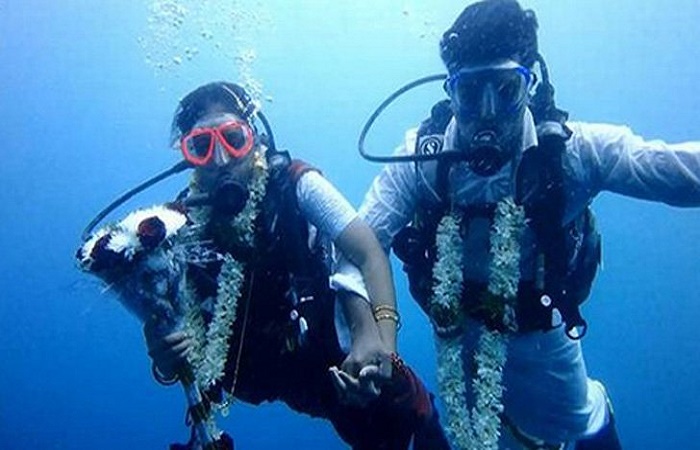 It wasn’t so much the stars that decided this wedding date, but the changing tides. At the crack of dawn on February 1, when all was well with the ocean, V Chinnadurai and S Swetha tied the knot 60 feet underwater off the coast of Neelankarai.

“It was a traditional marriage ceremony, only it was underwater. We dived in at an auspicious time in the morning and exchanged garlands and tied the thaali before 7.30am as per instructions from our priest,” says groom Chinnadurai, a software engineer and a licenced scuba diver.

His bride, Swetha, also a software engineer, began her course in scuba diving about a month ago to prepare for her wedding day. “I was nervous and so were my parents, but we had eight divers with us. It was exciting too because we’ve been trying to tie the knot since last week,” she says. “It was all in the hands of the sea.”

Though the couple practiced in wet suits, on Monday both bride and groom were dressed in traditional attire – Swetha in a koorai saree and Chinnadurai in a veshti – with all the loose ends velcroed firmly in place.

The ceremony was videographed and the bride and the groom emerged to cheering family members waiting on the seashore before they continued with the rest of the rituals.

“The entire wedding depended on the ocean currents,” says S B Aravind of Temple Adventures who helped the couple organize their unique wedding. “I had to tell them to leave the date of the wedding blank on the invitation. It was filled in only this morning when we confirmed the waters were calm enough for a dive.” Word has already spread, says Aravind, with divers lining up to say vows in the deep blue. There’s another Chennai wedding in February and one in the waters off the Puducherry coast in March.