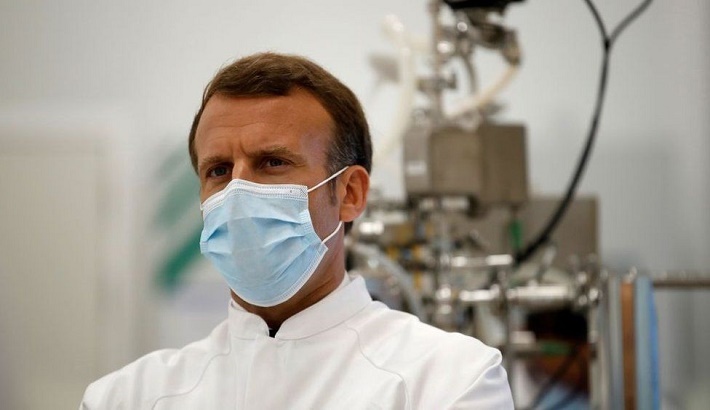 Hours after the European Medicines Agency (EMA) approved the Oxford-AstraZeneca vaccine on 29 January for use for all age groups in the EU, French president Emmanuel Macron claimed that it was "quasi-ineffective" for people over 65.

He added that "the early results we have are not encouraging for 60 to 65-year-old people concerning AstraZeneca".

But the UK government and British medical regulators strongly disagree.

So what is the evidence on the AstraZeneca (AZ) vaccine and older people?

Following Mr Macron's comments, France's Health Authority made an official recommendation on 2 February that the vaccine should not be used for people over 65. It said more studies were needed before it was rolled out to older age groups.

Other European countries have taken a similar position: Germany, Austria, Sweden and Poland only recommend it for people under 65, and Italy and Belgium for those under 55.

But the UK, and a number of other countries including India, Mexico and Argentina, have approved its use for all age groups.

"Current evidence does not suggest any lack of protection against Covid-19 in people aged 65 or over who receive the Covid-19 vaccine AstraZeneca," the UK Medicines and Healthcare products Regulatory Agency (MHRA) chief executive, Dr June Raine, said in a statement.

"The data we have show that the vaccine produces a strong immune response in the over-65s, and that it is safe."

What does the evidence show?

Ultimately, the decisions come down to the individual interpretations of available data.

During clinical trials, vaccines are given to thousands of people from different age groups, ethnicities and health conditions.

Others are given a placebo - that's effectively a jab which has no vaccine in it - for comparison.

Scientists then wait for a certain number of participants to catch the virus, and then see who has been infected. If most of them are from the group who had the placebo, it suggests that the vaccine is effective.

The issue for some European regulators is that they think not enough of the AZ trial participants aged over 65 caught the virus to make conclusions on the vaccine's effectiveness. This is because only two of the 660 people in that age group were infected.

Other companies, like Pfizer, included more older people earlier on in their trials, so have more data available.

MHRA advice says that the number of older people contracting the virus in the AZ trial was "too few to draw conclusions on efficacy".

So, the French, German and other agencies are focusing on this fact.

"Their assessment is that effectiveness is not yet demonstrated for over-65s. They have not said the vaccine is ineffective for over-65s," says Jim Naismith, a professor of structural biology at the University of Oxford.

They are not arguing, in other words, that the vaccine is 'quasi-ineffective' in older people - as President Macron claimed. But they are waiting for more information, which should be available in the coming weeks.

"Scientists often disagree about how much evidence is needed for any new advance and there is always more data to be secured," Prof Naismith explains. "Normally this all happens out of sight of the glare of the media and not in a pandemic, but such debates are an important part of the scientific process."

Those who are more confident in the vaccine's effectiveness on the over-65s are looking at other parts of the data.

For example, during an earlier stage of clinical trials the vaccine was shown to stimulate an immune response in older age groups similar to that seen in younger people.

This means that blood tests on vaccinated people found evidence of antibodies which help to fight off the disease caused by the virus.

Mary Ramsay, Public Health England's head of immunisations, said that while there "were too few cases in older people in the AstraZeneca trials to observe precise levels of protection in this group… data on immune responses were very reassuring".

And importantly there is no disagreement between any health regulators about the safety of the vaccine, which has been proved safe to use for anyone over 18.

All the vaccine companies are also continuing trials, including for vaccines which have already been approved. This will help to create even more accurate information on how effective different vaccines are on different groups, or with different dosage sizes.

The Oxford-AZ developers say that results from a trial of 2,000 adults over 55 in the UK will soon be available, and another trial in the US in older age groups is close to providing data too.

What have European authorities said?

The EMA is being a little less cautious than some of the national regulators in EU countries.

It said in its recommendation on 29 January that "there are not yet enough results in older participants (over 55 years old) to provide a figure for how well the vaccine will work in this group".

However, it added that "EMA's scientific experts considered that the vaccine can be used in older adults".

Before the EMA approval, Germany's public health body, the Robert Koch Institute, said there was "insufficient data" currently available on how effective the jab is in over-65s, and recommended it for use in people aged between 18 and 64.

We have not yet had any response from the French Agency for the Safety of Medicines and Health Products (ANSM) to a question about President Macron's remarks, and its recommendation on over-65s.

But an official at the Elysee Palace (the President's official residence) said: "Our strategy is to be efficient and protect our citizens. The debate about the vaccination calendar, its speed, is a legitimate one, but the debate on health safety and proper authorisations for vaccines is as important."

By the time the Oxford-AZ vaccine is widely available in the EU, though, it is possible that the opinion of national regulators which are exercising caution may have changed, as more data emerges.