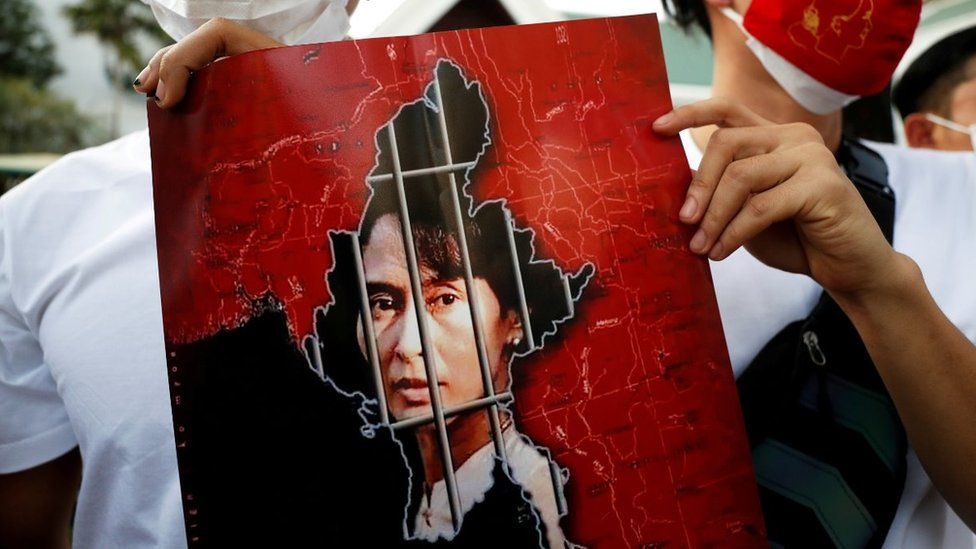 The military took power in the south-east Asian nation on Monday after arresting political leader Aung San Suu Kyi and hundreds of other lawmakers.

The coup leaders have since formed a supreme council which will sit above the cabinet.

In Myanmar's biggest city Yangon though, signs of resistance and civil disobedience have been growing.

The United Nations Security Council met on Tuesday but failed to agree on a joint statement after China did not support it.

A joint statement would have needed China's support which holds veto power as a permanent member of the (UN) Security Council.

Ahead of the talks, the UN's Special Envoy on Myanmar Christine Schraner had strongly condemned the military takeover which came after the army refused to accept the outcome of general elections held in November.

She said it was clear that "the recent outcome of the election was a landslide victory" for Ms Suu Kyi's party.

Why did China block the UN action?

"Through this foreign policy equivalent of gaslighting, China seems to be signalling its tacit support, if not emphatic endorsement, for the generals' actions," Myanmar expert Elliott Prasse-Freeman, of the National University of Singapore, told the BBC.

"China seems to be proceeding as if this is Myanmar's 'internal issue' in which what we are observing is a 'cabinet reshuffle,' as China's state media put it."

While he thinks a UN statement would not have made an immediate difference, it would still serve as "a first step for cohering an international response. That appears to not be forthcoming".

"Beijing's stance on the situation is consistent with its overall scepticism of international intervention," Sebastian Strangio, author and South East Asia editor at The Diplomat, told the BBC. Over the past few days, China has warned that sanctions or international pressure would only make things worse in the country.

While China does benefit strategically from Myanmar's alienation from the west, this does not mean that Beijing is happy with the coup, he cautions.

"They had a pretty good arrangement with the NLD and invested a lot to build a relationship with Aung San Suu Kyi. The return of the military actually means that China now has to deal with the institution in Myanmar that historically is the most suspicious of China's intentions."

Where is Aung San Suu Kyi?

Aung San Suu Kyi, who led the now-ousted elected government, has not been seen since she was detained by the military on Monday morning.

Dozens of others also remain detained, including the President Win Myint, members of her party's central committee and her personal attorney. They are reportedly being held under house arrest.

Her National League for Democracy (NLD) demanded her immediate release on Tuesday. It has also called upon the military to accept the results of the November election, which saw the NLD win more than 80% of the votes.