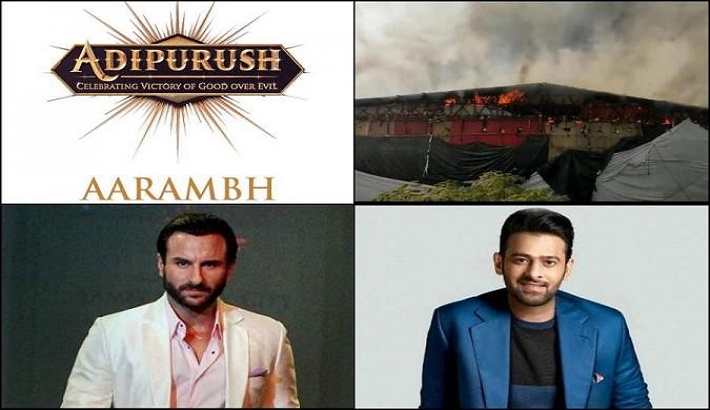 The first day of the shoot of ‘Adipurush’ was marred by a massive fire that broke out on the Bangur Nagar set in Goregaon around 4.30 pm.

Neither the leading man nor Saif Ali Khan, who plays the antagonist in the Om Raut-directed venture, was in the premises at the time of the incident.

The team has been shooting against massive chroma and green screen set up, since the film is said to be exploring a new motion capture technology.

However, post lunch today, a bystander saw some fire flakes outside the studio and on dwelling deep into it, Pinkvilla has learnt that there was a fire on the sets of Adipurush.

The source reveals, “It happened due to short circuit and the entire chroma set up went into ashes. However, it eventually came under control and no casualties have been reported. Om Raut and his entire team are safe.”

Prabhas and Saif were not a part of this shoot. “The situation is under control now.

In Adipurush, Prabhas plays a character modelled on lord Ram and Saif Ali Khan plays the role of the evil, Raavan. The film is gearing up for an Independence Day 2022 release.

The much-awaited Prabhas and Saif Ali Khan starrer Adipurush went on floors with a test shoot in January at a studio in Mumbai.