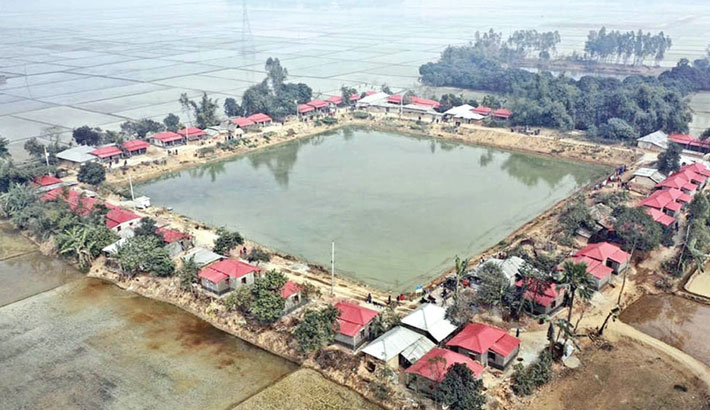 Living in a semi-pucca house is a dream of many landless ethnic people across the country. Prime Minister Sheikh Hasina made the dream come true for them by providing new houses to the poor families of the ethnic communities.

The government has been providing semi-pucca house to 3,500 families of the small ethnic groups (except hilly districts) in 61 districts across the country.

The new house owners expressed their gratitude for the generosity of the premier as they never even dreamed of living in semi-pucca houses.

New colourful houses have brought festivity in the ethnic community.

The people who got new houses said having a house of their own will revive their hopes of overcoming various challenges, poverty and adverse weather condition.

Prime Minister Sheikh Hasina has provided 50 houses to Santal families around the bank of Morabasta pond in Changuria village of Kamdia union under Gobindaganj Upazila in Gaibandha. Each of the houses comes with the ownership of two decimals land from the Kash land.

While visiting the area, it was seen that the newly constructed colourful houses are spreading joy in the Santal families.

Prior to getting the houses, the Santal families were living in government Khash land in makeshift houses. Babu Ram, a 65 years old man told the Daily Sun that the initiative by the Prime Minister has changed their lives as they were homeless and landless.

“My wife and I have been living in a mud house with our son. As an agricultural labourer, we cannot build this type of house and buy land,” he said.

Santal Palli Sharder Mandal Murmu said some 115 Santal families are living beside the Morabasta pond for more than 30 years.

“Most of them are day labourers and can’t own a house. The Prime Minister gave houses and land to 50 people living there. It is indeed a great gift for the landless people,” added he.

Ram Krishna Barman, UNO of Gobindaganj Upazilas, told the Daily Sun that a total 70 Santal families got house in his upazila.

There are 2.86 acres of land with a big pond and this property will be given to the Santal people through the co-operative system, he said.

Another small ethnic group living at Patnipara in Ghanirampur Baraghola village of Kursha union in Taraganj Upazila of Rangpur also got 25 new houses as a gift from the Prime Minister.

A total of 33 family of Patni community live there. Of them, 25 received semi-pucha house.

People of this ethnic group live on the banks of the river Jamunashwari. The people of this community make various products with bamboos and sell those to make a living. Krishna Das, a member of this community, told the Daily Sun that she has three daughters and earned around Tk 1500-2000 each week by selling bamboos-made products.

Her family has been living in a dilapidated house, rainwater pour into their house and the cold wave has been very difficult on them as the old and makeshift house did not offer any protection from rain and chilling weather.

“The new semi-pucha houses have changed our life in a way we never imagined,” she said.

Taraganj UNO Aminul Islam said the lives of the small ethnic group people have changed soon after getting 25 new houses.

Rangpur Deputy Commissioner Asib Ahsan said, “No one will be homeless in Mujib Year with the initiative of Prime Minister Sheikh Hasina.”

“Homes are being provided to members of 3,500 small ethnic groups across the country. This work is also continuing in Rangpur,” he added.

Rabidah group at Bangala Union of Ullapara in Sirajganj also got homes as a gift from the government led by Prime Minister Sheikh Hasina.

While visiting the area, it was seen that they are now working with a new enthusiasm for a better life after getting house from the Prime Minister.

Suvaki, middle-aged women in the area who now has her own house, told the Daily Sun that they did not have any wealth to build a good house but the Prime Minister’s gift has helped them realized the dream.

Earlier, some 69,904 destitute families across the country have received their permanent houses from the Prime Minister under the Ashrayan-2 project as part of the noble initiative taken by Prime Minister Sheikh Hasina to rehabilitate all the homeless and destitute during the Mujib Barsho.