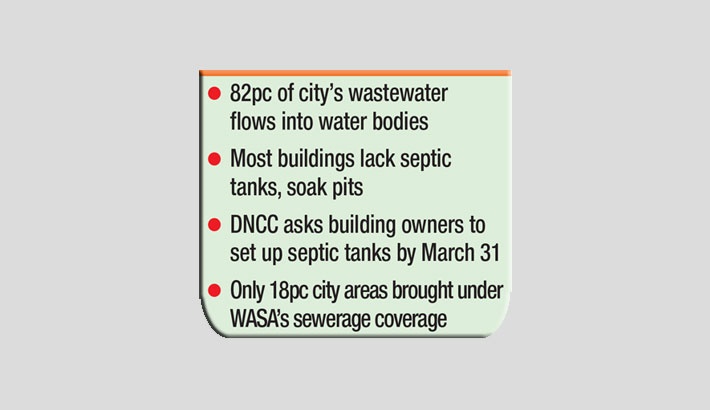 Most of the buildings in the city do not have septic tanks and soak pits for storing sewage, resulting in widespread environmental hazards caused by the rampant release of waste into the water bodies.

City planners say that some 82 per cent wastewater is being released into water bodies like rivers, canals and lakes through direct sewage links from different establishments, ignoring the law.

Though this is a punishable offence under the Local Government Act 2009, the house owners continue such practice without facing any legal consequences, experts said.

According to the Dhaka Water Supply and Sewerage Authority (WASA) data, city residents produce 1.75 billion litres of sewage daily with only 350 million litres being treated.

Dhaka WASA supplies 2.5 billion litres of drinking water a day, of which some 70 per cent turns into sewage.

Under the circumstances, the Dhaka North City Corporation issued a circular on January 31, asking the owners of various establishments to set up septic tanks and soak pits in their respective buildings by March 31 to avoid legal action.

DNCC Mayor Atiqul Islam told the Daily Sun that they would take action against those who will release waste into water bodies after this timeframe.

“We have given the owners a 60-day timeframe. If the directive is not followed, we will run a mobile court drive against the building owners,” he said.

Bangladesh Poribesh Andolon joint general secretary Iqbal Habib said, “A large volume of liquid waste is being produced daily from each building. It is challenging to treat the waste by building owners.”

The environment of the capital is facing a serious threat due to mindless releasing of the sewage into the water bodies, he said, urging the authorities concerned to take proper measures to stop the practice.

Dhaka WASA Managing director Taqsem A Khan told the Daily Sun that only 18 per cent area had been brought under the sewerage coverage. He expressed hope that they will be able to bring the capital under cent per cent coverage of sewerage lines by 2027.

“Building owners are supposed to ensure proper management of sewage produced by them. But, most of the house owners release their sewage into road and water bodies. The practice is a punishable offence,” he said.

He also said Rajdhani Unnayan Kartripakkha (RAJUK) must ensure that no building is constructed without septic tank and soak pit.

DSCC chief executive officer ABM Amin Ullah Nuri said they would arrange a meeting with Dhaka WASA to discuss the measures against such hazardous activities.

“We will sit with Dhaka WASA to address the problem,” he said.

Contacted, DNCC Chief Waste Management Officer M Saidur Rahman said “We will collect the sewage from the septic tanks of the buildings if the owners agree to pay us.”