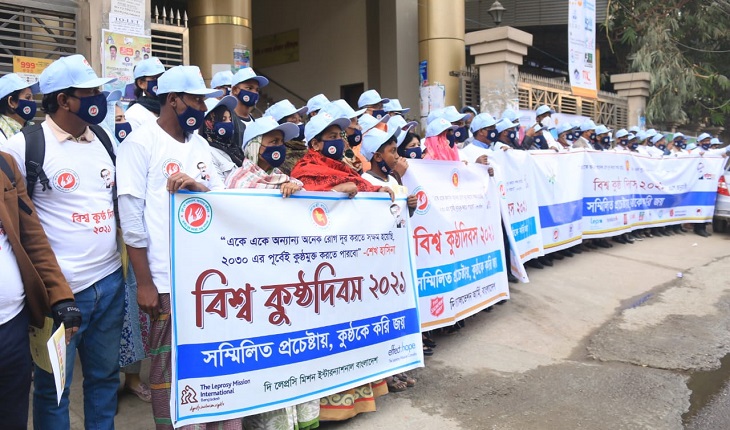 About 4,000 fresh leprosy cases are being detected every year in Bangladesh and almost eight percent of the patients suffer from leprosy-related disability, according to a document from Leprosy & TB Coordinating Committee (LTCC) on ‘World Leprosy Day-2021’.

With a slogan ‘#Beat Leprosy’, the National Leprosy Programme (NLP) and LTCC member organisations jointly celebrated the World Leprosy Day-2021 in Bangladesh as elsewhere on Sunday.

The country observed the day with a Bengali slogan ‘Sommilito Prochestay, Kushtoke Kori Joy’ which means it is possible to defeat leprosy through concerted efforts.

Addressing the National Conference 2019 on Zero Leprosy Initiative by 2030 in Dhaka in 2019, Prime Minister Sheikh Hasina directed everyone to avoid negative attitudes and stop discriminating leprosy patients and instead take initiative for their proper treatment, said a media release on Sunday.

“I believe that we could build a leprosy-free Bangladesh much before the target 2030, if we all work sincerely in this regard,” said the Prime Minister.

In observance of the World Leprosy Day-2021 on Sunday, a standing rally and discussion on leprosy were arranged in the morning on the Directorate General of Health Services (DGHS) premises in Mohakhali.

Posters, banners, leaflets and T-shirts containing texts on leprosy awareness were distributed among the participants.

Besides the programme in Dhaka, civil surgeons’ offices across the country and leprosy-focused organisations arranged various events celebrating the World Leprosy Day-2021.

According to the World Health Organization (WHO), Leprosy, also known as Hansen’s disease, is a chronic infectious disease caused by Mycobacterium Leprae (a relative of TB).

Leprosy, one of the Neglected Tropical Diseases (NTD), primarily affects the skin, the peripheral nerves, mucosal surfaces of the upper respiratory tract and the eyes.

The first signs of leprosy are patches of skin which look paler than normal or sometimes nodules on the skin. It is known to occur at all ages ranging from early infancy to very old age.

WHO as well as organisations like The Leprosy Mission International provide confirmation that leprosy is curable and treatment in the early stages can prevent disability.

Bangladesh has achieved the WHO target of reducing the number of leprosy patients to one in 10,000 population in 1998.

Although the target was achieved two decades earlier, still about 4000 people are being diagnosed as affected by leprosy in Bangladesh.

Among the 3638 persons affected by leprosy in 2019, a total of 252 people suffered from leprosy-related disability, NLP data shows.

According to the National Leprosy Program (NLP), altogether 226,711 leprosy cases were detected in Bangladesh in between 1985 and 2019 but after receiving MTD treatment 218,538 of them recovered during this period.

NLP data shows 26,479 people detected with leprosy-related disability in between 1985 and 2015 in Bangladesh.

Along with leprosy-related complication and disability, persons affected by leprosy in Bangladesh suffer from social stigma, discrimination, and superstitions everywhere which must be removed to make leprosy-free Bangladesh, said health experts.

According to information from World Health Organization (WHO), though the leprosy one of the Neglected Tropical Diseases (NTD) seem to be forgotten, still 600 people are diagnosed with leprosy start medication for recovery.