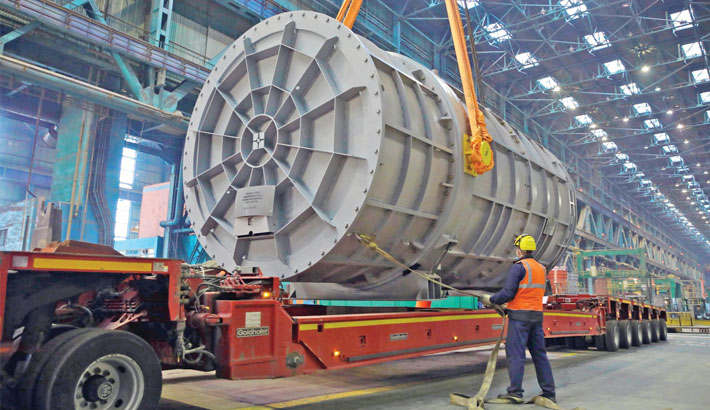 The cost of the project to enhance navigability in Mongla-Rooppur waterway to facilitate faster and safe transport of heavy equipment to the under-construction Rooppur nuclear power is set to go up by a large margin.

The ministry of shipping has taken a new decision to establish a link with Chattagram port as well to get more benefit from the project, planning commission sources said.

It has sent a revised project proposal to the planning commission, seeking 69.37 percent or over Tk 6.63 billion hike in project cost.

The project was picked up at an estimated cost of Tk 9.56 billion during July 2017-June 2025 period. The cost has now been proposed to be increased to over Tk 16.19 billion without increasing project time.

Dredging work is being carried out in 460km waterway from Mongla to Rooppur, Pakshi under Pabna district via Chandpur-Mawa-Goalanda under the scheme.

“A proposal for increasing the cost of the ongoing project has been sent to the Planning Commission for approval. The cost hike proposal has been sent because of an increase in project work,” said a shipping ministry high up, seeking not to be named citing sensitivity of the matter.

An inter-ministerial meeting on the proposal was held recently with Physical Infrastructure Division Member of the Planning Commission Mamun-Al-Rashid in the chair.

In the meeting, the commission sought to know about different aspects of the cost hike proposal. The ministry of shipping gave necessary explanation with regard to its proposal.

BIWTA sources said the cost is being increased because of increase in maintenance dredging, manpower, rise in cost and volume of navigation supporting equipment, accommodating new components like travel allowance, training, collecting eco sounder and GPS, motorbikes, office equipment and furniture and cabin cruiser instead of speed boat.

Under the revised scheme survey will be conducted in 870km waterway, compensation for crop losses in 100 hectares of land alongside carrying out engineering survey 20 million cubic metres, 53.7 million maintenance dredging.

The ministry of shipping will install international navigation aid alongside increasing draft to 4.2 metres to 4.5 metres in the route to help movement of large vessels for carrying heavy equipment to the nuke plant.

Besides, a new rail line will be constructed from take off point at Ishwardi bypass to the power plant site at Rooppur, while total dredging work will stand at 9.3 million cubic metres.

Rooppur nuclear power plant project is the costliest project of the government with Tk 1.14 trillion estimated cost to generate a total of 2,400MW of nuclear power from two units of the country’s lone nuke power plant.

The implementing agency has already taken initiative to ensure supply and manufacturing in line with construction schedule for some 31 Long Term Manufacturing Equipment (LTME) under the two units of the plant.

The manufacturing and supply of LTME for the nuke power plan are underway in Russia and other European countries. Some of them have already reached the project site.