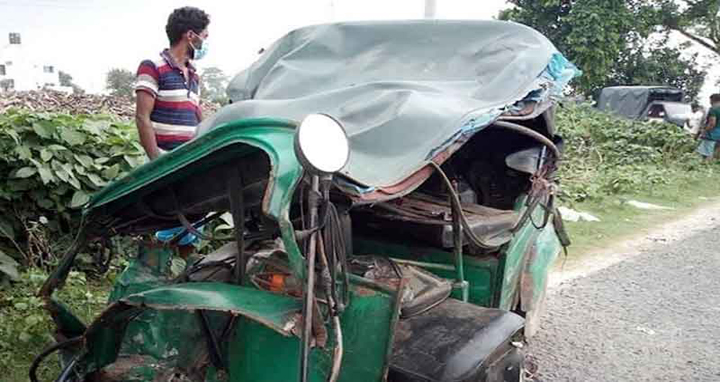 Five people were killed and one other was injured after a truck hit a CNG-run auto-rickshaw on Sherpur-Jhenaigati road at Mirzapur in Sadar upazila of Sherpur on Sunday.

Three of the deceased were identified as Selim Mia, 25, son of Taher Ali of Chandgao Tingharia area of Nalitabari upazila, Roksana Begum, 30, wife of Rafiqul Islam of Naljora area and Jobed Ali, 25, son of Yusuf Ali of Bandadhara in Sadar upazila.

Abdullah Al Manun, officer-in-charge of Sadar Police Station, said the accident occurred around 8:45am when the truck hit a auto-rickshaw, leaving three people dead on the spot and three others injured.

The injured were taken to Sherpur District Hospital where two others succumbed to their injuries later.

Of the victims, five people were passengers of the auto-rickshaw which was going to Sherpur from Jhenaigati.

Traffic remained suspended for some time after the accident.

Police rushed to the spot and rescued the victims after the accident.

Police also seized the bus but could not arrest the driver of the truck as he fled the scene.