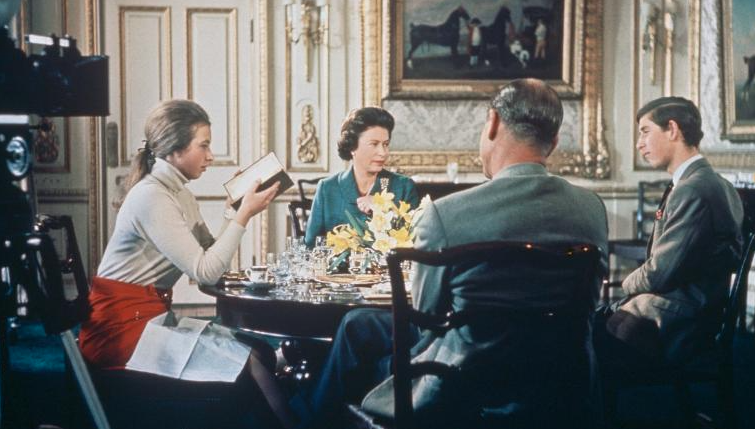 An infamous 1969 fly-on-the-wall documentary about the British royal family, supposedly banned by Queen Elizabeth II for decades for giving the public an overly intimate view of the royals, has been mysteriously leaked onto YouTube.

The film provided an unprecedented look inside the royal households and was watched by millions when it first aired on the BBC. But it was subsequently stashed in the corporation's archives, reportedly at the request of Buckingham Palace, and hasn't been aired since the 1970s.

It isn't known how the program, titled "Royal Family," was unearthed or who posted it to YouTube. The video was swiftly removed from the video-sharing platform after a copyright request was made.

In the film, the monarch reportedly compares the US ambassador to a gorilla. "There was a gorilla. I had the most terrible trouble ... he had short body, long arms," the PA Media news agency quoted her as saying.

Other, more mundane scenes, showing the royals eating together and the Queen rummaging in her purse to buy six-year-old Prince Edward candy in a shop, were considered groundbreaking for showing the famously opaque family in a new light.

"This disgusting gooey mess is going to be in the car, isn't it?" the Queen declares, according to PA.
The 110-minute film was watched by 30 million people in 1969, and remains one of the UK's most-viewed television broadcasts. The BBC estimates more than 350 million watched it worldwide.

Its production was more recently depicted in Netflix series "The Crown," which portrayed the royals' displeasure at having TV cameras inside their premises.

A BBC spokesperson declined to comment to CNN on the video's sudden re-appearance, but the corporation did not dispute reports that it had submitted the copyright claim that led to its removal from YouTube.

"When a copyright claim is filed we remove the content immediately, as is the case with this upload," YouTube told CNN.

The film was made after the royals granted the BBC unique access to film their everyday lives. The family was increasingly seen as being out of touch with regular society in the 1960s, and the program was considered an attempt to regain relevance.

Princess Anne, the Queen's daughter, later spoke of her unhappiness with the program. "I never liked the idea of the royal family film. I always thought it was a rotten idea," she said, according to PA.

"The attention that had been brought on one ever since one was a child, you just didn't want anymore. The last thing you needed was greater access," Anne added.