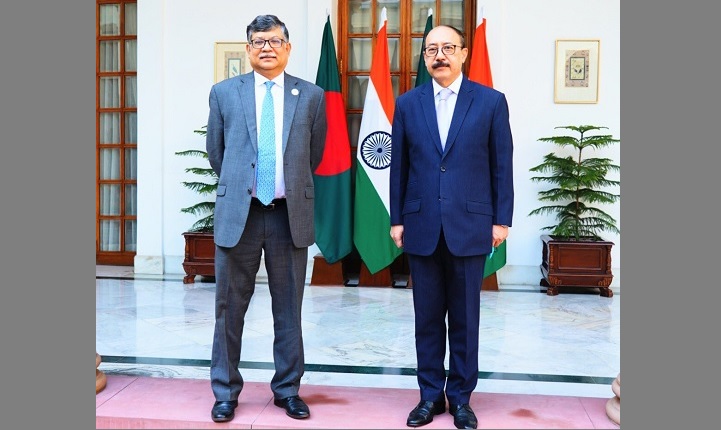 Dhaka and New Delhi on Friday held dialogue to prepare for the forthcoming visit of Indian Prime Minister Narendra Modi to Dhaka in March to attend the golden jubilee celebrations of independence of Bangladesh and commemoration of the 50th anniversary of diplomatic ties between the two countries.

This was part of Foreign Office Consultations (FOC) held on Friday (Jan 29) in New Delhi, in which Foreign Secretary Masud Bin Momen from Bangladesh side and Foreign Secretary Harsh Vardhan Shringla from Indian side co- chaired the meeting. 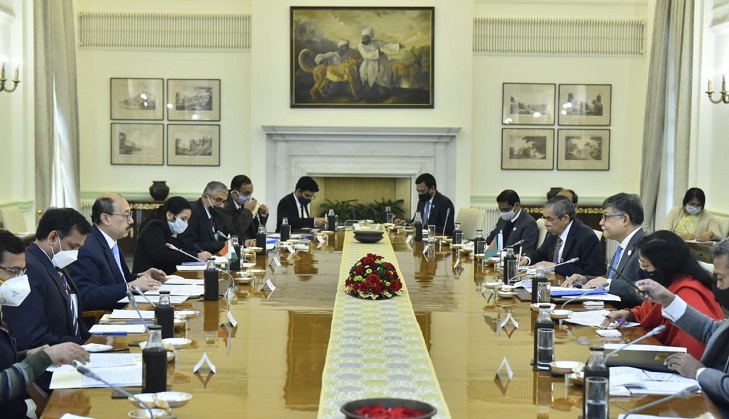 Both sides held a comprehensive review of the progress achieved in the bilateral relationship, including in the areas of Covid-19 cooperation, trade, connectivity, development partnership, power, energy & water resources, regional and multilateral cooperation as well as border management and security & defence cooperation, officials said.

“The discussion also focused on preparations for the forthcoming visit of Prime Minister Shri Narendra Modi to Dhaka in March 2021 and events relating to the commemoration of the 50th anniversary of diplomatic ties were also discussed,” India’s Ministry of External Affairs said in a statement after the FOC.

Underscoring the importance of the year 2021 in the context of the 50th anniversary of the liberation of Bangladesh, the 50th year of bilateral diplomatic ties as well as the birth centenary of Bangabandhu Sheikh Mujibur Rahman, both sides decided to further strengthen the ongoing coordination to jointly commemorate these anniversaries.

In this context, both sides expressed their appreciation for the participation of the Bangladesh tri-service marching contingent at the 2021 Republic Day Parade. Both sides noted the significance of this event in reminding present generations in both countries about the struggle and sacrifices of Indian and Bangladesh forces and peoples during the 1971 Bangladesh Liberation War, reads the statement.

Both sides noted the importance of swift implementation of the Lines of Credit in the bilateral development partnership. Expressing satisfaction that the high-level development partnership monitoring mechanism was operationalised with its first meeting held on January 03, 2021, both sides stressed the need to increase the utilization of funds and streamlining and expediting approval processes.

The two sides also agreed to maintain the steady momentum of bilateral cooperation and people to people ties. In this regard, both sides noted with satisfaction the renewal of the Air Travel Bubble arrangement that will facilitate essential travel between the two sides.

The FOC expressed satisfaction at the intensity of bilateral exchanges, continuing steadily despite COVID-19. Both sides noted with appreciation the close cooperation on Covid-19 related issues, including India’s gift of 2 million doses of COVISHIELD vaccines to Bangladesh in keeping with India’s Neighbourhood First Policy.

The Bangladesh Foreign Secretary was accompanied by Bangladesh High Commissioner in New Delhi Mohammad Imran, Secretary (East) Mashfee Binte Shams and representatives from the Ministries of Foreign Affairs, Commerce and Water Resources of Bangladesh. The Indian delegation consisted of representatives from the Ministries of External Affairs, Home Affairs, Commerce and Industry, Jal Shakti and Finance.

During his stay in New Delhi, Masud bin Momen will visit the Bagabandhu-Bapu Digital Exhibition currently on display at Vigyan Bhawan and will be interacting with Indian Foreign Service Officer Trainees at the Sushma Swaraj Institute of Foreign Service.