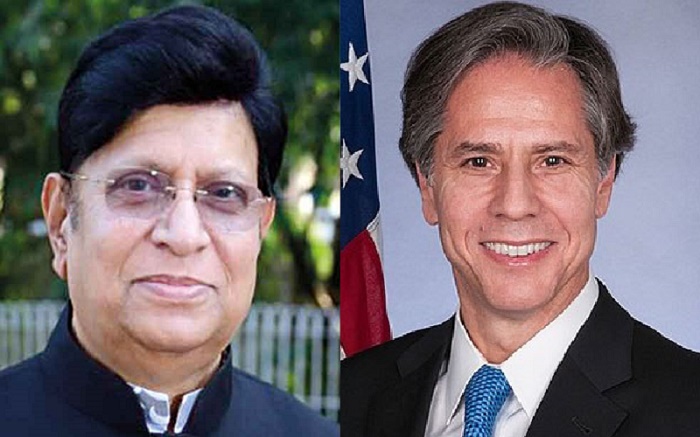 Foreign Minister AK Abdul Momen has sent a congratulatory letter to new US Secretary of State Antony John Blinken, whose nomination to the ministerial post has been confirmed by US Senate on last Tuesday.

In his letter, Bangladesh Foreign Minister expressed his disposition to work closely with his US counterpart to achieve the two friendly countries’ common goals of peace, development and security for all.

Terming the Bangladesh-US relations as a unique partnership, Momen stressed upon Bangladesh’s willingness to work with the new US Administration to further strengthen the enduring ties, address common challenges and to build on the progress and prosperity that has been achieved.

He also expressed expectation that the new US administration would deport Rashed Chowdhury, the fugitive killer of the Father of the Nation Bangabandhu Sheikh Mujibur Rahman, in the spirit of ensuring justice and rule of law.

Thanking the United States for the strong political support and humanitarian assistance received on the Rohingya issue, Bangladesh Foreign Minister expressed hope that Biden Administration would involve itself more proactively in the international efforts to resolve of the crisis through safe and sustainable return of the displaced Rohingyas to their ancestral land in in Myanmar.

Opining that Bangladesh can be a lucrative destination for new US investment, he stated Bangladesh Government’s keenness to have wider US cooperation in economic arena, especially in the form of trade liberalisation and FDI.

As Bangladesh being the present Chair of the 48-member Climate Vulnerable Forum (CVF), Momen expressed deep satisfaction about the return of the US to the Paris Agreement, and hoped that two countries would work closely to save the planet for the future generation.

Through the letter, Secretary of State Blinken has been cordially invited to visit Bangladesh to attend ongoing celebration of the Birth Centenary of the Father of the Nation and the Golden Jubilee of the country’s independence.

Foreign Minister Momen underscored that such a visit of the US Secretary of State would further strengthen the multifaceted bilateral relations, and would also provide Blinken an overview of the miraculous development Bangladesh has achieved under the visionary leadership of Prime Minister Sheikh Hasina.