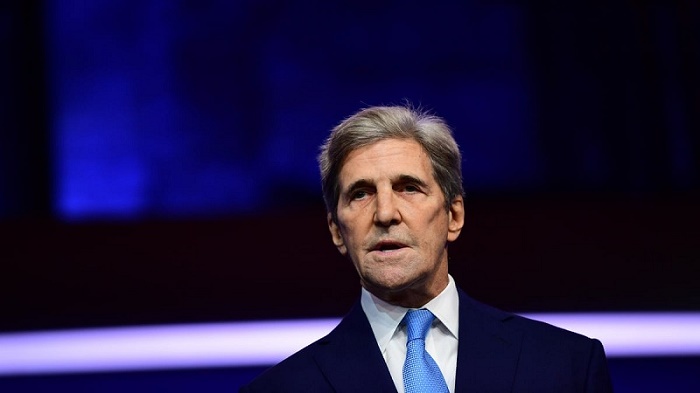 US climate envoy John Kerry has told the BBC a UN climate summit in the UK this November is "the last best chance" to avert the worst environmental consequences for the world.

He said years were lost on the climate issue under President Donald Trump, "who didn't believe in any of it".

Dozens of world leaders will attend the COP26 conference in Glasgow, Scotland.

His latest edicts include a freeze on new oil and gas leases on public lands and set out to double offshore wind-produced energy by 2030.

Mr Biden - who re-entered the US into the 2016 Paris climate accord in one of his first acts as president - said America must lead the response to the crisis.

What did Kerry say?

The newly appointed US climate tsar said: "Glasgow will be extremely important.

"In fact, I would say that in my judgment, it is the last best chance the world has to come together in order to do the things we need to do to avoid the worst consequences of the climate crisis.

"Three years ago, we were told we have 12 years to avoid those consequences. Three of those years were lost because we had Donald Trump, who didn't believe in any of it. And now we have nine years left to try to do what science is telling us we need to do."

But at a White House news conference on Wednesday, Mr Kerry acknowledged the crisis would not be fixed even if the US reduced its emissions to zero.

He said: "He [Mr Biden] knows Paris alone is not enough. Not when almost 90% of all of the planet's global emissions come from outside of US borders.

"We could go to zero tomorrow and the problem isn't solved."

During his four years in office, Mr Trump rolled back environmental regulations as he sought to maximise the nation's fossil fuel production.

The Republican president also claimed credit for the US achieving a level of energy independence, becoming a net petroleum exporter, midway through his term.

Mr Trump - who once called climate change a hoax - withdrew the US from the Paris pact, arguing that it unfairly left the world's other two top polluters - India and China - free to use fossil fuels.

Nearly 200 countries signed up to the accord, which aims to keep the global temperature rise this century well below 2C above pre-industrial levels.