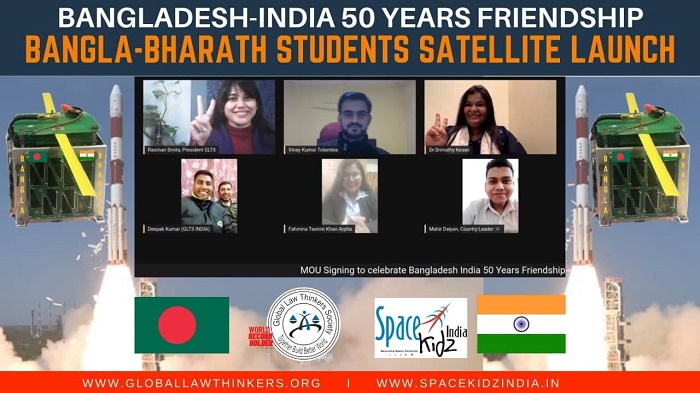 Bangladesh and India will blast off a joint student satellite this year from private sector with a vow to inspire young generation in scientific research and space education.

According to the agreement, the officials planned to launch the student satellite in the third or fourth quarter of this year by Isro’s Polar Satellite Launch Vehicle (PSLV). Among others, GLTS Country Leader Mahir Daiyan, Smils4Millions Founder Deepak Kumar and Indian Institute of Governance and Leadership Assistant Director Vinay Kumar Tolambia were connected to the meeting.

GLTS Founder Raoman Smita said five Bangladeshi students will participant in a joint camp in India to build the nano- satellite together. “We hope, the joint initiative will inspire young generation in learning space issues as well as rocket science,” Smita told the Daily Sun. Space Kids India CEO Srimathy Kesan said five students from Bangladesh will be trained by her organization in satellite systems and technology.

"We plan to start the training programme in April or May. They will collaborate with us in making the satellite which will be 10 cm x 10 cm x 10 cm and will consist of basic payloads intended for training purposes,’’ she said.