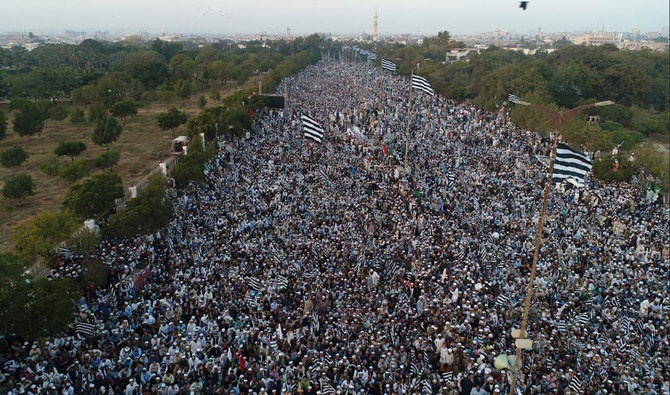 Thousands of opposition activists in Pakistan criticized any possibility of extending diplomatic recognition to Israel on Thursday, saying that the people of their country would not allow that to happen until the creation of Palestine and the return of its displaced people to their native land.

Organized by the Jamiat-e-Ulama-e-Islam (JUI-F) party, the rally was also attended by leaders of the Pakistan Muslim League-Nawaz (PML-N), Pakistan Peoples Party (PPP) and other opposition factions who are part of the Pakistan Democratic Movement (PDM) that seeks to bring down Prime Minister Imran Khan’s government.

The Pakistani media reported last November that the government was under pressure to recognize the Jewish state, though officials in Islamabad, including the prime minister, strongly ruled out the possibility of any normalization with Israel.

Speaking to a local news channel, Prime Minister Khan said last month that Pakistan would refuse to recognize Israel until it guaranteed Palestinian rights. “Pakistan is a democratic society — and our entire nation stands with Palestinians,” he said.

The country’s opposition, however, blamed the ruling Pakistan Tehreek-e-Insaf (PTI) administration for generating debate over the issue.

“A narrative is being built that Israel’s recognition is in Pakistan’s interest. The PML-N and PDM strongly reject this discourse,” former prime minister Shahid Khaqqan Abbasi said while addressing the rally.

“This is not a matter of interests. It’s matter of ideology. There are more than 200 countries in the world, but only Pakistan’s passport stops its citizens from visiting Israel. How can we compromise on ideology for the sake interests?” he asked.

“This gathering aims to tell those at the helm of affairs that this can never happen. Our 220 million are united that Pakistan cannot compromise on Palestine and Kashmir. The PDM is united on this, and Pakistan is united as well,” Abbasi added.

The chief of the opposition PDM alliance, Maulana Fazlur Rehman, said that Pakistanis supported the people of Palestine in their struggle for an independent country.

“I want to convey a clear message to our Palestinian brothers that Pakistani nation will support you till their last drop of blood. We will stand by you until Palestine is free,” Rehman said. “The founder of Pakistan said that his country would never recognize Israel since it had stabbed Palestinians. The Muslim ummah has not forgotten these words.”

Senator Saeed Ghani, a senior PPP leader, said that his party shared the stance of JUIF on the issue.

“No matter how much differences we have or which party we belong to, we are all united [against the idea of recognizing Israel],” he said.