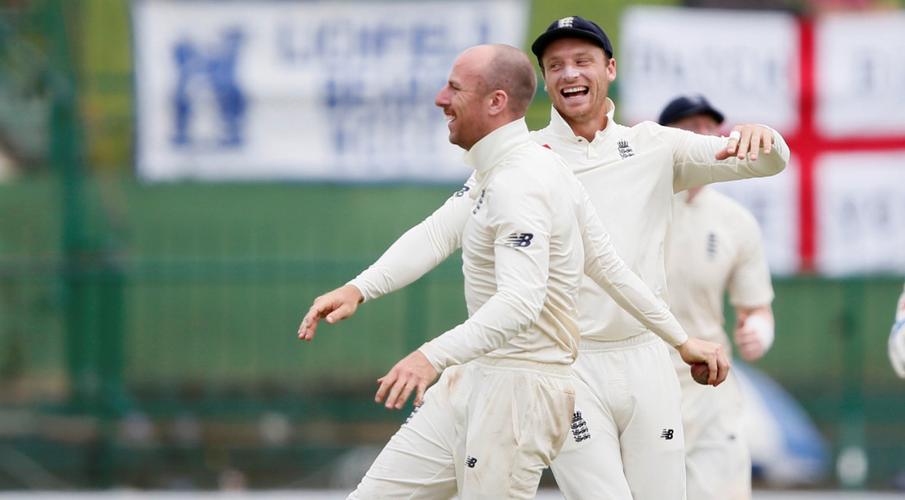 England reached 46 for one in their chase of 164 and a 2-0 Test series clean sweep against Sri Lanka on Monday after spinners Jack Leach and Dom Bess combined to bundle out Sri Lanka for 126.

Zak Crawley was the man out, caught at for 13, on a day-four wicket as left-arm spinner Lasith Embuldeniya grabbed another victim after taking seven wickets in the first innings.

Opener Dom Sibley, on 14, and Jonny Bairstow, on 17, then steered the team to tea with an unbroken partnership of 29. They need another 118 for victory.

It sets up an engrossing finish in the match behind closed doors in Galle, where England looked nervy before chasing down 74 runs in the first Test.

Leach and Bess took four wickets each to dispatch Sri Lanka in the afternoon session after the hosts started their second innings early in the day with a lead of 37.

He was the only batsman to score higher than 20 as Sri Lanka collapsed from 29 for one in their second bat.

Embuldeniya put up some resistance with a ninth-wicket stand of 48 with Suranga Lakmal, who made 11 not out, before skipper Joe Root took the final two wickets with his off spin.

Leach made his left-arm spin count as he got Kusal Perera trapped lbw for 14, and off-spinner Bess sent back Oshada Fernando for three in the first session.

First-innings centurion Angelo Mathews was then bowled by Bess for five and Chandimal fell to Leach, with James Anderson taking a superb running catch.

Earlier Dilruwan Perera trapped overnight batsman Leach lbw for one on just the 11th ball of the day after England resumed on 339 for nine in Galle.

Leach took a single and number 11 Anderson hit a boundary off Embuldeniya, who returned career-best figures of 7-137 in just his ninth Test, to add five runs to the overnight score.

Root scored 186 -- after his double century in the first Test -- to steer England's first-innings response.

Riding on Root's 228, England won the opening Test of the resumed series, which started last March but was postponed due to the coronavirus pandemic.