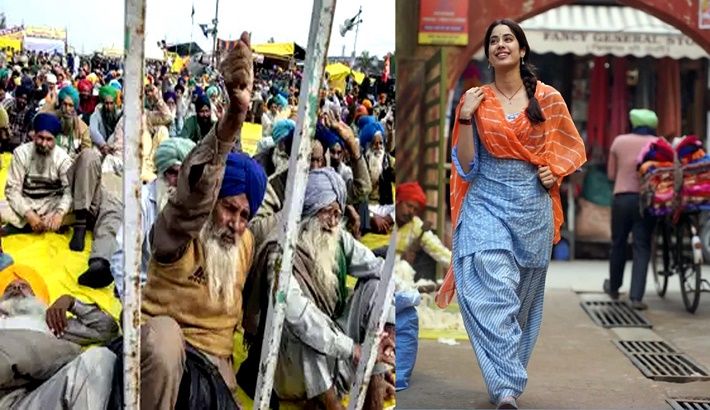 Shooting of Bollywood actress Janhvi Kapoor’s upcoming film, ‘Good Luck Jerry’ was postponed after a group of farmers held a protest in Punjab.

The incident took place near Civil Lines on Saturday when protesting farmers opposed the filming of the movie.

Shouting slogans against Bollywood, protesters lamented that “no actor” extended support to farmers’ agitation against the Centre’s three farm laws.

Some farmers held protest outside the hotel where the film’s crew is staying.

Following the incident, the Dhadak actor shared an Instagram Story in support of the farmers. “Farmers are at the heart of our country. I recognise and value the role that they play in feeding our nation. I hope a resolution is reached soon that benefits the farmers,” Kapoor had written.

Earlier this month, shooting of ‘Good Luck Jerry’ had briefly come to a halt at Bassi Pathana in Fatehgarh Sahib after a group of farmers had insisted that Kapoor make a comment on the ongoing farmers’ protest,  Mid-Day reported.

Farmers from Punjab and Haryana have been camping at Delhi’s borders for several weeks, demanding the repeal of the farm laws and a legal guarantee on the minimum support price for crops.