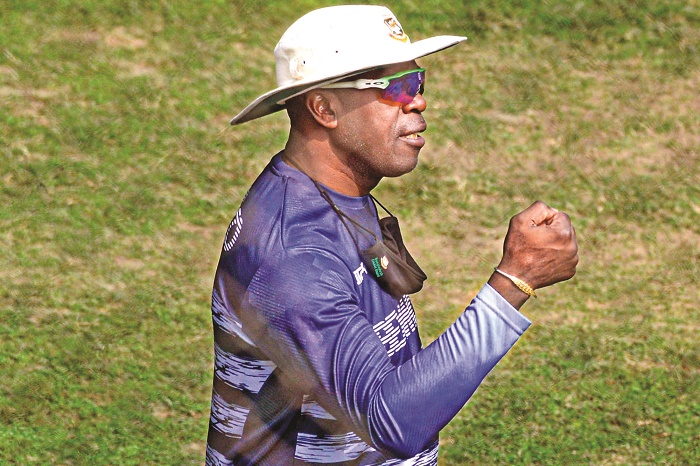 Gibson had been a great admirer of Hasan since seeing him in the nets and probably played a key role behind pushing him for a spot in the ODI’s playing XI.

The right-arm pace bowler did not take long to show case his skill picking up three wickets on his debut against Windies that will certainly play as a confidence booster going ahead.

‘The main theme of every pace bowling coach is almost the same. Whether they are local or foreign coaches, it’s quite similar. He [Gibson] is giving me some good advice. I am doing everything they are telling me to do to make my line, length, yorker, slower balls more accurate.’

Hasan is considered as one of the quickest pacers in the country’s new crop of fast bowlers and has already showed glimpses of it in the first two matches against West Indies, where he surprised the opposition batters with his extra pace.

Hasan believes that he can gradually improve his pace by maintaining his process both on and off the field.

‘Actually, the whole thing is a process. Depending on what you do day-by-day, how much work you are putting in, how you are maintaining yourself, your pace will gradually increase. It’s very important to maintain yourself.’

Hasan Mahmud is confident about bowling with the same tenacity he is showing in his debut series when he comes across bigger oppositions in international cricket in the future.

Hasan made his debut in one-day internationals against West Indies on Wednesday and made an immediate impact with his disciplined bowling and claimed 3-28 in his six overs.

Though the 21-year-old took one wicket and went for six runs per over in the second match, his pace and ability to move the ball both ways earned him praise.

Bowling against a side with little to no experience in international cricket helped his cause but the pacer said that he would have the same attitude if he had to debut against a tougher opposition.

‘Yes, of course,’ Hasan answered in an online press conference on Sunday when asked about if his attitude would be the same if he had debuted against a stronger team like India or England.

Hasan made his international debut for the Tigers’ in March last year in a Twenty20 match against Zimbabwe.