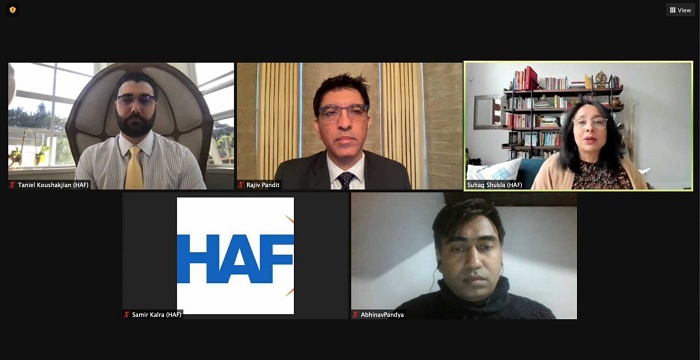 As the new US Congress and Administration begins, the Hindu American Foundation (HAF) held its first Capitol Hill Speaker Series web event of the new year on January 21, 2020. The event marked the 32nd anniversary of Kashmir Exodus Day (January 19), where approximately 350,000 Kashmiri Hindus (Pandits) were ethnically cleansed from their ancestral homeland in the Kashmir Valley by Pakistan-sponsored Islamist terrorists.

Entitled “Kashmir and the Future of US-India Relations,” the program featured presentations from Abhinav Pandya, Founder and CEO of USANAS Foundation, an India-based national security and geopolitical think tank, and Dr. Rajiv Pandit, a Dallas, Texas-based Board Member of the Indo-American Kashmir Forum. The program was moderated by HAF Executive Director Suhag Shukla, Esq.

Mrs. Shukla introduced the panelists and offered opening remarks. She explained the history and discriminatory effects of Articles 370 and 35A of the Indian constitution as well as the votes in parliament that led to their repeal on August 5, 2019. She gave an overview of the new freedoms and rights enjoyed by the citizens of Jammu and Kashmir and Ladakh, and moderated the discussion at the conclusion of the program.

Mr. Pandya delivered his presentation via Zoom live from Srinagar in the Kashmir Valley, and presented the situation on the ground today as well as his experience when he was in Kashmir during the repeal of Articles 370/35A in 2019. He opened with reflections from people on the ground in the Kashmir Valley, Jammu, and Ladakh as well as the different demographics of the two Indian Union Territories. He then delved into the history of deep rooted corruption in Kashmir’s local governance prior to the repeal, including the infiltration of radical Islamist groups in certain parts of the administrative apparatus and current attempts by terrorist organizations to radicalize Kashmiri youth.

Mr. Pandya also presented on the recent District Development Council (DDC) elections held in Kashmir and attempts by US designated Foreign Terrorist Organizations (FTOs) like Hizb-ul-Mujahideen and their ideologically affiliated Jamaat e-Islami (JeI) who threaten the local population from participating in elections and other programs being implemented to bring jobs and economic growth.

Next, participants heard the story of Dr. Rajiv Pandit’s family in exile and what life was like in Kashmir before radicalization and terrorism came to the Kashmir Valley. He shared the effects on his family and hundreds of thousands of others who were driven from their homes, as well as Hindu American and Kashmiri American views and support for the government’s repeal of Articles 370/35A. Dr. Pandit also discussed his views on US policy towards India and the region.

The program concluded with a question and answer discussion that touched on a wide range of issues from India’s national security, Pakistan sponsored militancy, China’s aggression on India’s eastern front and in the Indian Ocean and how China and Pakistan seek to destabilize India and the subcontinent at the expense of India’s national security, US interests, and democracy as a system of government.

Launched in 2019, the HAF Capitol Hill Speaker Series brings programming designed specifically for Members of Congress and staff to explore complex policy issues important to the Hindu American community and hear directly from seasoned analysts in their respective fields.

“We were delighted to present these two expert witnesses to Congressional staff and offer them the opportunity to hear real life stories from people on the ground in Kashmir,” stated Suhag Shukla, Esq. “The Hindu American Foundation is committed to educating Members of Congress and their staff on the human rights violations committed by terrorist organizations in Kashmir and throughout the region and how vital the US-India relationship is to protecting democracy and advancing peace and stability in South Asia,” Shukla said.