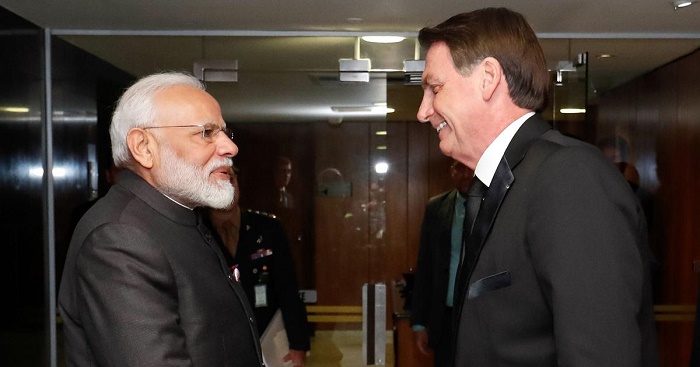 Brazilian President Jair Bolsonaro on Friday thanked India for supplying the coronavirus vaccine to his country. India has begun commercial exports of Covid-19 vaccines and sent 20 lakh doses each to Brazil and Morocco.

“Brazil feels honoured to have a great partner to overcome a global obstacle by joining efforts,” Bolsonaro tweeted. “Thank you for assisting us with the vaccines exports from India to Brazil.” The president also shared the same message in Portuguese along with an image depicting Hindu deity Hanuman carrying “Sanjeevani booti” from India to Brazil.

According to Sanskrit epic Ramayana, Hanuman was tasked with bringing the “Sanjeevani booti”, a herb with life-saving properties, from the Dronagiri hill for deity Ram’s younger brother Laxman, who was injured in a battle. After being unable to identify the herb, Hanuman returned with the entire hill.

Modi replied to Bolsonaro’s tweet, saying it was India’s honour to be a partner of Brazil in tackling the coronavirus pandemic together. “We will continue to strengthen our cooperation on healthcare,” he tweeted.

India’s Ambassador to Brazil Suresh K Reddy said that it was a historic day for India-Brazil relations, reported The Indian Express. “Brazil is the first country to get such a consignment,” Reddy said. “PM Modi said we’ll make vaccine available to all countries and we’ll continue to work towards that.”

According to Brazilian public health experts, the 20 lakh vaccines sent by India only scratch the surface of the shortfall in the country and more doses are required to cover priority groups.

“Counting doses from Butantan [a Sao Paulo state research institute] and those from India, there isn’t enough vaccine and there is no certainty about when Brazil will have more, or how much,” said M’rio Scheffer, a professor of preventive medicine at the University of Sao Paulo.

Brazil has so far recorded 2,14,147 deaths because of the coronavirus, according to the John Hopkins University data. This is the second-highest fatality count in the world after the United States. The coronavirus tally in Brazil stood at 86,97,368.