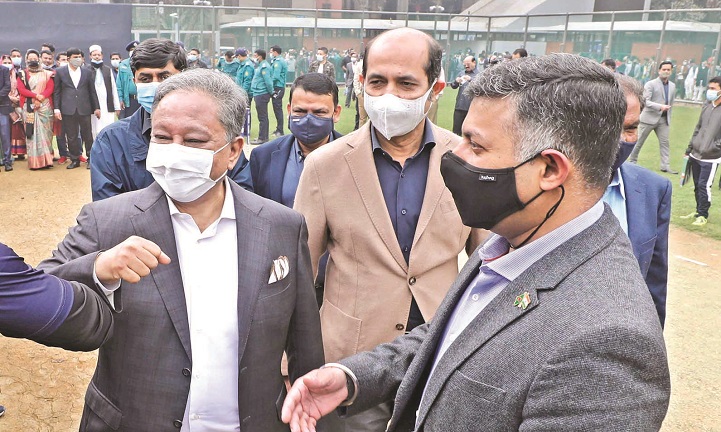 Bangladesh Cricket Board president Nazmul Hasan, Dhaka North City Corporation Mayor Atiqul Islam and Indian High Commissioner to Bangladesh Vikram Kumar Doraiswami are seen during the inaugural ceremony of a friendly match at Mohammadpur in the capital on Saturday.

Bangladesh Cricket Board president Nazmul Hassan Papon said on Saturday that he is relieved to see his ace all-rounder Shakib Al Hasan returning to form against West Indies.

Shakib shone with the ball in the opening game while made some runs in the second game to brush aside all the doubts regarding his ability following his below-par performance in the Bangabandhu T20 Cup.

“If you ask me about performance, Shakib and the rest have bowled well and I am impressed with the bowling. Shakib, about whom we were so worried, seems returning to form quickly too,” Nazmul told reporters while inaugurating a friendly cricket match in Mohammadpur.

Nazmul added that he is not seeing major changes in the last ODI despite the hosts having already won the series. Nazmul said they are not ready to lose points considering the series is part of ICC Super League.

The top eight teams, including hosts India, will gain direct entry to the 2023 ICC World Cup while the bottom five will have to play in a qualifying event in Zimbabwe along with teams from the lower divisions of the qualification pathway.

“There may be changes in the XI but we don't want to underestimate anyone,” Nazmul said.

“I will like you to remember that this is the start of the ICC Super League. We have already earned 20 points. Every match is very important so we can't take anything for granted. We want to qualify for the World Cup directly so we are taking every game seriously,” he added.