Kings make three in a row 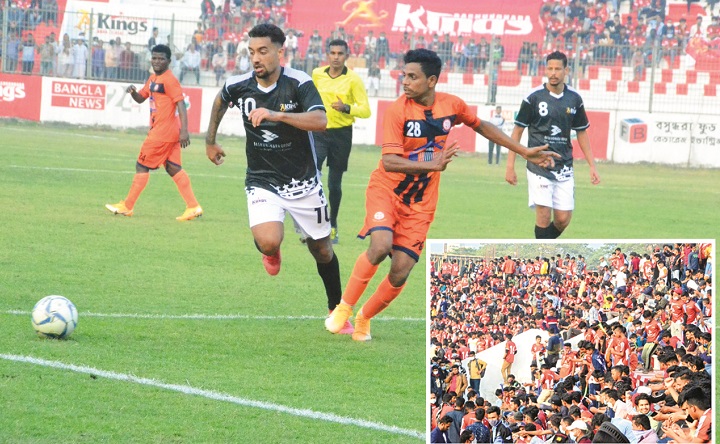 Players of Bashundhara Kings and Brothers Union vie for the ball during their Bangladesh Premier League Football match at the Shaheed Dhirendranath Dutta Stadium in Cumilla on Saturday. Kings fans are seen in the insert. – BFF Photo

Defending champions Bashundhara Kings made a memorable debut at their new home venue, the Shaheed Dhirendranath Dutta Stadium in Cumilla, as they defeated Brothers Union Limited by a solitary margin in their third match of the ongoing Bangladesh Premier League on Saturday.

Kings Brazilian forward Robson Azevedo da Silva Robinho netted the match-winner in the second half and brought a smile to the faces of thousands of Bashundhara Kings fans at a jam-packed stadium in Cumilla.

Kings now have earned all nine points from their three matches. Kings earlier beat Uttar Baridhara by 2-0 goals and Bangladesh Police FC by 2-1 goals in their first two matches.

The victory against Brothers Union also took Kings’ winning streak to eight, including five straight wins in the Federation Cup.

Kings didn’t take time to put pressure on their opponent as their strikers produced some close chances but Brothers Union defence, especially their goalkeeper Mohammad Titumir Chowdhury, denied all their efforts.

Few minutes before the half time, a close-range header from Kings captain Topu Barman was slightly missed and the first half ended goalless.

Kings continued their attack in the second half despite wasting many chances to score the opener.

Robinho and Raul’s shots went off the target in the 56th and 61st minute respectively.

Robinho finally broke the deadlock in the 64th minute with an eye-catching right-footer from inside the box, off a perfect cutback from midfielder Mohammad Ibrahim (1-0) and the goal remained decisive at the end.

The match was, however, the second home match for Kings this season. The holders played their first home match against Uttar Baridhara Club at the Bangabandhu National Stadium on the opening day of BPL after Cumilla venue wasn't completely ready for hosting matches.