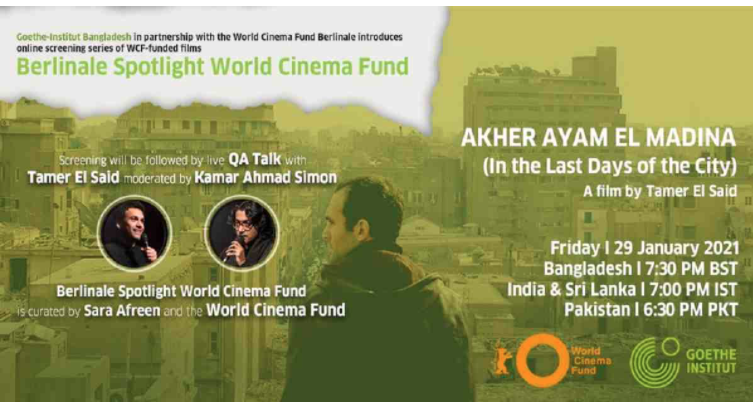 An online film screening event titled ‘Berlinale Spotlight World Cinema Fund’ will begin at Goethe-Institut in the capital on Friday.

The online series will showcase outstanding international productions in the next four months. In addition to the sessions, each screening will be followed by a live QA Talk with the filmmakers moderated by award-winning auteur Director Kamar Ahmad Simon from Bangladesh.

Kamar himself has been awarded with WCF for his upcoming film ‘Shikolbaha’ (Iron Stream). All the films have been carefully picked from more than two hundred WCF awarded films. The selected bundle has already been in official selection of many international festivals and made notable audience reception for their cinematic brilliance.

The opening edition of the event is scheduled on Friday (29 January) at 7:30 pm, BST with “AKHER AYAM EL MADINA” (In the Last Days of the City), a film by Tamer El Said. Viewers may watch the film, followed by a live QA Talk by clicking at the film link, which will be shared simultaneously through the Facebook page and website of Goethe-Institut Bangladesh as per the film schedule.

AKHER AYAM EL MADINA (In the Last Days of the City) is a Winner of the Caligari Film Award at the Berlin International Film Festival 2016 (Forum) and Best Director at the Buenos Aires International Festival of Independent Cinema.