What the West can do about China’s Uyghur labour camps 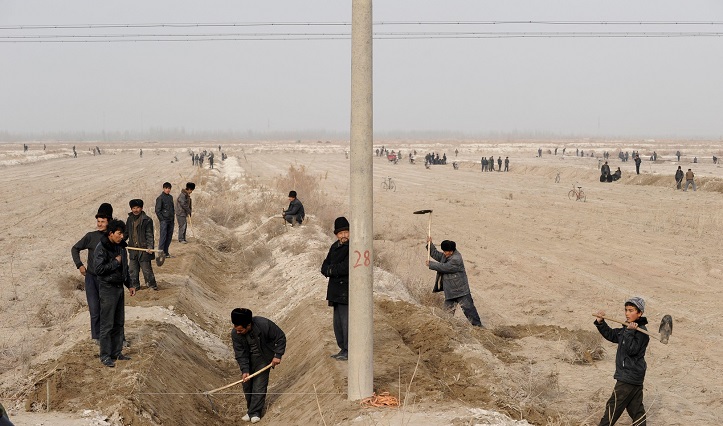 Coca-Cola’s most controversial bottling plant is a huge factory located in an industrial zone just outside the city of Urumqi in western China. Logistically, the factory is well situated: the international airport is a short drive away, as is the high-speed train station close to the fashionable Wyndham hotel. But the problem for Coca-Cola — and other western companies such as Volkswagen and BASF, which operate plants in the same region — is the existence of hundreds of facilities not mentioned on any official map. The Cofco Coca-Cola plant, a joint venture with a Chinese state company, is surrounded by prisons and re-education camps in which China suppresses local ethnic minorities, according to human rights experts. Many of those minorities are forced to work for factories or farms making products also sold in the UK.

Xinjiang, a huge area of remote deserts and rich mineral resources, is the centre of what world religious leaders, including five Church of England bishops, have named as ‘one of the most egregious human tragedies since the Holocaust’. In the past three years, China has put an estimated one million Uyghurs, Kazakhs and other Muslim minorities — more than one-tenth of the adult population — in re-education camps. In the camps, they are forced to renounce their religious belief and praise the Communist party, and are subjected to brainwashing. Inmates often try to kill themselves.

Evidence shows that China is now shifting from mass internment to forced labour to control the local population. According to a study by the Australian Strategic Policy Institute, a think tank established by the Australian government, more than 80,000 Uyghurs were transferred out of Xinjiang to work in factories in other parts of China between 2017 and 2019 ‘under conditions that strongly suggest forced labour’. Some had been sent directly from detention camps to production lines. In the factories, the Uyghurs are held under prison-like conditions, with long working hours and daily indoctrination sessions, according to online evidence and witness reports. The workers are not allowed to leave, even if they work close to their homes.

‘After being released [from a camp], you need to work according to their policies,’ Muhamet Qyzyrbek told the New York Times. His 31-year-old wife, Amanzhol Qisa, had spent a year in a re-education camp in Xinjiang and was then sent to work at a clothing factory for three months. She was paid less than half of minimum wage. Gulsira Auelchan was trained to use a sewing machine when she was held in a camp in 2017 and 2018. After her release, she was pressured to sew gloves at a factory near the camp. ‘I don’t know how many hours per day I worked. There was no clock,’ she told the German weekly Die Zeit. ‘We left the dormitory in the dark and came back in the dark.’

In the past two years, these programmes have been significantly enlarged. According to China’s official statistics, 2.6 million ‘surplus rural workers’ in Xinjiang were ‘relocated’ within one year — an increase of 46 per cent. Beijing strictly denies any forced labour and justifies its policy, perversely, as a ‘poverty elimination programme’. But experts and foreign governments are alarmed. ‘Evidence of forced Uyghur labour within Xinjiang, and in other parts of China, is credible, it is growing and deeply troubling to the UK government,’ Foreign Office Minister Nigel Adams told parliament last month. Last week, Foreign Secretary Dominic Raab announced plans to outlaw Chinese imports with links to human rights abuse. The UK will introduce fines and possible sanctions against companies which are connected to slave labour. The US government has already imposed sanctions and restrictions against 48 Chinese companies suspected of using forced labour or providing technical assistance to the suppression system in Xinjiang. Among these companies are suppliers of well-known international brands such as Nike, H&M and Apple.

The Coca-Cola factory in Urumqi is in the middle of Xinjiang’s system of detention camps and re-education facilities, described by the US Congress as the ‘largest mass incarceration of a minority population in the world’. Within 30km of the plant, there are 25 prisons and internment camps, according to ASPI, which used satellite technology and witness reports to identify these secret facilities. In the whole of Xinjiang, there are at least 380 incarceration camps, some of them huge structures with watchtowers, barbed wire and thousands of inmates.

Coca-Cola opened its plant as part of a 210 million yuan (£23 million today) investment 12 years ago, but the factory is run by the Chinese majority stakeholder Cofco. Can Coca-Cola’s managers be sure that — possibly without their knowledge — forced labour isn’t happening in their factory or among their suppliers? In a statement, Coca-Cola says its company policies ‘strictly prohibit forced labour’ and that it uses third-party agencies to oversee compliance. But travel and administration restrictions in Xinjiang make it nearly impossible to monitor labour standards. As a result, at least three major monitoring organisations have stopped doing human rights assessments in the region.

It is not just detention and labour camps that China uses to control Xinjiang’s estimated 14 million Uyghurs and other Muslim minorities. The region’s party secretary, Chen Quanguo, is praised by state media as the inventor of ‘convenience police stations’, a grid system with thousands of hi-tech checkpoints. From the stations, which are as little as 300 metres from each other, all parts of daily life are digitally monitored, from private internet usage to the commute to work. Cars have to be fitted with GPS sensors and drivers need a face scan to buy petrol, so the authorities can always track their movement. Surveillance cameras monitor all streets and are sometimes even installed inside private houses. The result is a new form of technology-driven authoritarian rule that is unparalleled in the world. When I visited Xinjiang undercover in 2018, I spoke to people whose family members had been sent to camps for using WhatsApp, for praying and even for buying too much petrol at the fuel station.

For Volkswagen, which produces Santana sedans and Tharu SUVs in Urumqi, its presence in Xinjiang is political. Economically, the factory in Xinjiang hardly makes sense; parts have to be transported thousands of kilometres from the coastal regions, and instead of the planned 50,000 cars per year, it produces fewer than 20,000. The 2013 factory was a political present to China’s government, which wanted to show its success in the region. Closing the factory today would risk Volkswagen’s entire China business, which brings in billions in profits. Every second VW worldwide is sold in the People’s Republic. Stephan Wöllenstein, the company’s China chief, says that Volkswagen is ‘concerned’ about the situation in Xinjiang, but adds: ‘I don’t think that to steal away from the region would solve the political problems.’

Even for companies that do not have factories in Xinjiang, it is difficult not to get tangled in China’s Muslim clampdown. Apple has been criticised for doing business with a company named O-film, a major supplier of technical parts for iPhones, which is accused of using several hundred Uyghur workers transferred from Xinjiang in its factories. The US Department of Commerce put O-film on its sanction list for suspected human rights violations. The US food company Kraft Heinz has business relations with Cofco Tunhe, China’s largest tomato processor, which is also suspected of participating in Uyghur labour programmes. All mentioned companies denied any involvement or knowledge of forced labour.

The textile industry is under special scrutiny. Xinjiang is a major producer of cotton, which is mainly being picked by hand. China has started to substitute Han-Chinese workers in the fields with Uyghurs and other minorities, using propaganda campaigns and strong pressure, according to researchers. Adrian Zenz, senior fellow at the Victims of Communism Memorial Foundation and a leading expert on Xinjiang, estimates that most of today’s cotton in Xinjiang is picked under forced labour conditions and with minimal payment. ‘More than half a million Uyghurs — probably whether they want to or not — are being sent by the state to the fields for three months,’ he says.

For the fashion industry, it is nearly impossible to avoid the issue. Brands including Hugo Boss, Adidas, Muji, Uniqlo, Costco, Caterpillar, Lacoste, Ralph Lauren and Tommy Hilfiger have been named in reports tying them to Xinjiang factories or materials. One in five cotton products worldwide is made with Xinjiang cotton, though Marks & Spencer last week signed a call to action regarding Xinjiang and pledged to stop using any cotton from the region.

But in the end, it is us as consumers who will influence the fate of the millions of people in Xinjiang. For many in the West it has become normal to boycott products that violate animal rights or destroy our environment. It is time that we apply the same standards to slave labour and gross human rights violations when we are about to buy a product labelled ‘Made in China’.