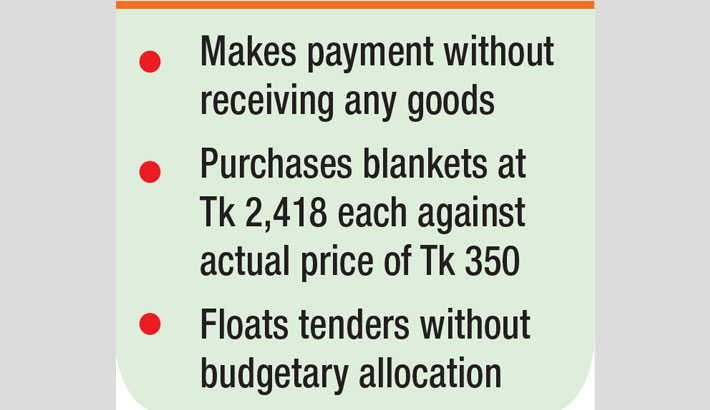 Mugda Medical College Hospital (MMCH) resorted to unbridled corruption and irregularities in procurement of different equipment and other items during the last fiscal year, finds a government audit.

It not only purchased goods at a price much higher than the actual one but also paid bills without getting any goods, according to the report of the audit conducted by the Directorate of Health and Family Welfare Audit for 2019-20 financial year.

Besides, the MMCH floated tenders of several hundred millions of Taka without any budgetary allocation in violation of the Public Procurement Rules (PPRs) 2008, resulting in increasing the government’s debt.

It also issued work orders to the selected suppliers to the tune of several hundred millions of Taka which caused a huge debt on the government, said the audit report.

It was mentioned in the work orders that bill of the work would be paid to suppliers after getting sufficient allocation or else partial bill would be provided for the vendors.

The Daily Sun obtained a copy of the audit report.

Mentioning that he was serving at the post for the last few months, he said he does not know what happened during the tenures of the past directors.

Hospital sources said Motazzerul Islam Mithu, a well-known contractor in the health sector who runs the syndicate nicknamed ‘Mithu Syndicate’, controlled all these procurements. Sometimes high officials fall into his trap and engage in corruption.

It was learned that six directors were appointed from January 2, 2019 to the end of 2020. They include Amin Ahmed Khan, Shahid M Sadiqul Islam, Shah Golam Nabi, M Abul Hashem and M Raushan Anwar.

Talking to the Daily Sun, former MMCH Director Amin Ahmed said he does not know anything about it. “If there’s any allegation of irregularities, I’ll face it officially,” he said.

The hospital authorities paid bills to suppliers without receiving any goods which caused huge financial loss to the government.

On September 26, 2019, MMCH paid Tk 625,000 to Lexicon Merchandise for K3EDTA Tube, but there was no record found in the register of stock and pathology department of having such an item.

Besides, they made payment from the revenue budget and Health, Population and Nutrition Sector Programme which is totally violation of the procurement rules.

Some equipment were also purchased through an unholy nexus of some hospital officials and suppliers using the open tendering method (OTM), the report cited.

According to the report, MMCH bought 300 blankets at Tk 2,418 each from Euro Trading Co, but the actual price of the blanket is at best Tk 350 while Dhaka Medical College Hospital bought the same blanket at Tk 472 each.

As per the personal information of the owners of these companies, they are siblings, their father’s name is late Rafiq Uddin Bhuiyan and mother is Nur Jahan Begum and their office and home addresses are also same.

Besides, the hospital authorities bought Renal Care A and Renal Care B and F Catheter (Arrow) at a price at least 2-5 times higher than the actual market price through the unholy nexus, causing a loss of Tk 6,065,920 to the state coffer.

However, no approval was taken from the Finance Ministry for this, which is a violation of the PPRs.

Additional Secretary (Audit and Financial Management) of the Health Services Division Mohammed Shahadat Husain told the Daily Sun that action will be taken against those involved in such anomalies. “We’ll settle those audit objections after getting proper replies. Or else, money will be recovered from those responsible,” he said.