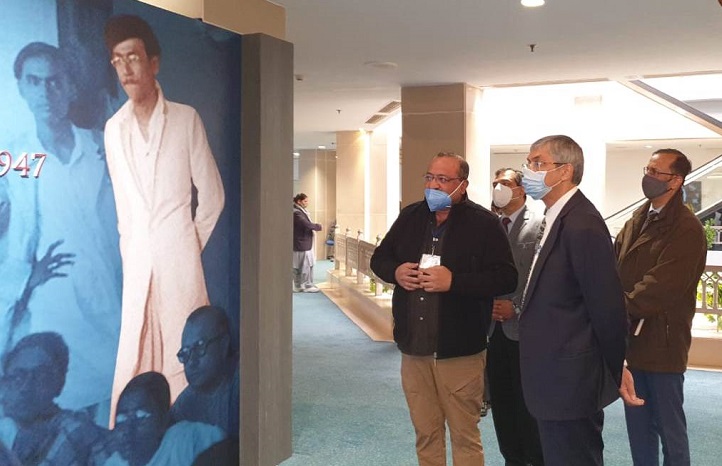 Bangladesh High Commissioner to India Muhammad Imran, accompanied by the officers of the mission, visited the Bangabandhu-Bapu digital exhibition at Vigyan Bhawan in New Delhi on Friday (Jan 22).

This marks the Mujib Borsha, the birth centenary of Father of the Nation Bangabandhu Sheikh Mujibur Rahman and the Golden Jubilee of Bangladesh’s independence through nine-month liberation war backed by India, said a press release of Bangladesh High Commission in New Delhi.

Curator of the exhibition Birad Rajaram Yajnik guided the delegation through the display which has 21 walls of information and 100 points of digital engagement.

The walk through the history begins with these words: Two extraordinary men at different times in history changed the destiny of their people, one adopting Ahimsa, while the other embraced his language to carve an identity against the oppressors.”

The exhibition showcases the bond of blood and shared sacrifices that unite their two great nations.

Highlights of the exhibition include a rare photograph of the two great leaders meeting for the first time in 1947, their childhood and youth, their leading movements for freedom, the Jallianwala bagh massacre in Punjab and Bangladesh genocide tunnel.

From its present location the exhibition will move to Dhaka, travel to the United Nations before culminating in Kolkata in early 2022.