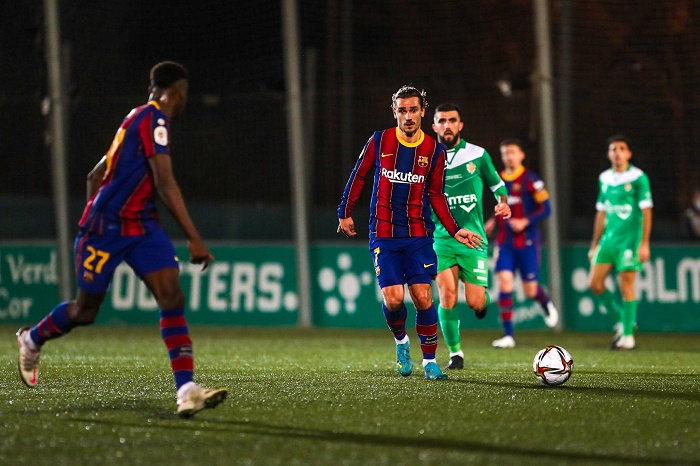 Barcelona needed extra-time goals from Ousmane Dembele and Martin Braithwaite to end the cup run of third-division side Cornella and reach the Copa del Rey last 16 with a 2-0 win on Thursday.

Barca missed two penalties, Miralem Pjanic and then Dembele both guilty from the spot, but Dembele made amends by scoring early in extra time, before Braithwaite made it two after 120 minutes.

Barca were looking for a reaction on the back of their shock loss to Athletic Bilbao in the Spanish Super Cup final on Sunday, when Lionel Messi was sent off for the club for the first time.

With Messi suspended, a rotated line-up laboured to victory after a third consecutive extra-time in eight days.

Pjanic missed the first penalty in the 39th minute after Ronald Araujo went down under a high foot from Albert Estelles, Cornella goalkeeper Ramon Juan diving low to his right.

Antoine Griezmann and Braithwaite both failed to finish early in the second half and then Griezmann blazed over on the volley after a clever free-kick from Pjanic.

Another penalty presented a golden opportunity in the 80th minute after another Estelles error, this time a handball. Dembele stepped up but the result was the same, his driven effort down the middle again kept out by Ramon Juan.

Cornella, who beat Atletico Madrid in the previous round, saw their resistance last only two minutes into extra time as the power of Dembele's shot from distance was too much for the keeper, who could only divert the ball in off the crossbar.

Estelles completed his nightmare night by being sent off before Braithwaite added a second on the counter-attack.