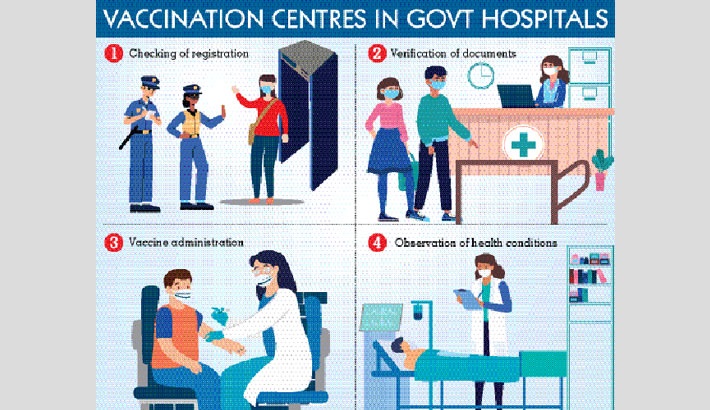 Bangladesh will start the countrywide Covid-19 vaccination programme on February 8 as a consignment of two million doses of the jab arrived in the country from India yesterday as a gift from the neighbouring country.

Before launching the nationwide inoculation drive, a dry run will be held and it will begin on January 27/28, said sources at the Health and Family Welfare Ministry.

Prime Minister Sheikh Hasina will also inaugurate the National Vaccination Programme against Covid-19 either on January 27 or 28, the sources said.

Contacted, Health Services Division Secretary Md Abdul Mannan on Thursday said they will be sure today when the prime minister will open the drive.

Nazmul Islam, a line director and spokesperson of the Directorate General of Health Services (DGHS), on Thursday told the Daily Sun that the online registration of vaccine recipients will begin on January 27.

Bangladesh aims to inoculate 16 million people against the coronavirus in the first phase with 32 million doses of Covishield vaccine.

A chartered flight of Air India carrying the two million doses of Covishield vaccine, developed by Oxford University and AstraZeneca and manufactured by Serum Institute of India (SII), landed at Hazrat Shahjalal International Airport in Dhaka around 11:20am.

After the arrival, the vaccine shots were taken to the district EPI (Expanded Programme on Immunisation) depot in Tejgaon in two large covered vans. The vaccine doses will later be distributed to different hospitals as per the government’s list.

As per a tripartite agreement, Bangladesh is purchasing 30 million doses of the Covishield vaccine from the SII in addition to the gift ones.

The Indian company will supply the vaccine through its local vendor Beximco Pharmaceuticals Ltd.

The first consignment of 5 million doses of the jab will arrive in the country on January 25.

According to the SII, the Oxford-AstraZeneca vaccine can be carried in a normal fridge as it can be stored, transported and handled for at least six months at 2-8 degrees Celsius (35-46F). This vaccine is based on the virus’s genetic instructions for building the spike protein. It uses double-stranded DNA.

It said the vaccine has been shown to prevent Covid-19 disease in ongoing clinical trials following two doses given between 4 and 12 weeks apart. “The duration of protection against Covid-19 disease is currently unknown. You may get protective immune response four weeks after the second dose of Covishield vaccine,” the SII said.

The SII fact-sheet said the vaccine will be given to the receiver as an intramuscular (IM) injection only, preferably in the deltoid muscle.

The Health Ministry sources said the government will run the vaccination at government hospitals at district and upazila levels across the country from February 8.

According to the Health Ministry, the vaccination centres will be established at upazila health complexes, district or general hospitals, government and private medical college hospitals and specialised hospitals, police and BGB hospitals, Combined Military Hospitals and Chest Diseases hospitals.

As per the Oxford-AstraZeneca guidelines for its vaccine, the second dose can be administered after eight weeks from the first shot of the jab.

Mannan said the government will start a dry run of vaccination at some hospitals in the capital on January 27 or 28.

He said vaccination will be launched at Kurmitola General Hospital. Around 25 front liners, including doctors and nurses, will be administered the vaccine on the first day as a test case.

Around 500 people, including healthcare providers and volunteers, will be given the vaccine the next day at Kurmitola Hospital, Mugda General Hospital, Kuwait Bangladesh Friendship Government Hospital and Dhaka Medical College Hospital as part of the dry run, the secretary said.

The nationwide vaccination drive will begin after observing the vaccinated people for one week as per the protocol of the World Health Organization (WHO).

The secretary said the government has a plan to vaccinate 8-9 crore people of the country in phases.

The DGHS earlier said a list of priority recipient groups was made for the first-phase vaccination.

About 37 per cent of people who are under 18 and about 4 million pregnant women will not be brought under the vaccination programme. Severely sick people will also not be given the vaccine, it added.

The government has developed an app, ‘Surakkha’, for the online registration of vaccine recipients. The vaccine seekers can complete registration online on www.surakkha.gov.bd website or using the app.

Government officials and employees have been asked to give their national identity cards to departments concerned for the registration, the DGHS sources said.

Health and Family Welfare Minister Zahid Maleque recently said the coronavirus vaccine may have side effects like every drug. “Some side effects have already been found in Oxford-AstraZeneca vaccine, too. As far as we know, the side effects aren’t severe. It can’t be said there will be no side effect of the vaccine. People will have to take the vaccine agreeing that there might be its side effect.”

Secretary Mannan said each vaccine recipient would be followed up via the telemedicine number: 16263.

DGHS spokesperson Nazmul Islam said vaccine recipients will be kept under observation for at least 30 minutes after they receive the jab and if they show any adverse effect, they will be treated at the hospital where they are inoculated.

The DGHS sources said the government will carry out anti-body test after administering the second dose of the vaccine to detect whether the vaccine is effective or not.