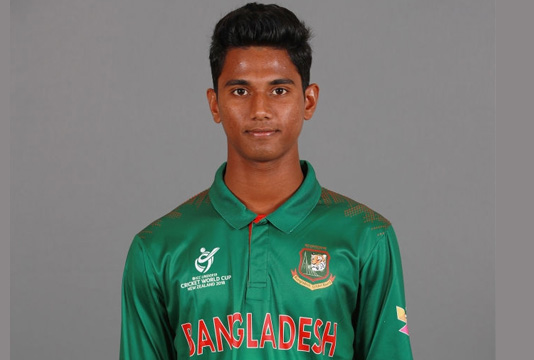 Bangladesh pace bowling coach Ottis Gibson was not surprised by the success of his student Hasan Mahmud, who claimed three wickets on his debut match against West Indies on Wednesday.

Hasan’s three wickets came in the space of nine deliveries after a tame first spell in the first ODI in which Bangladesh registered a six-wicket victory to lead the three-match series by 1-0.

“He didn’t surprise me at all, that’s why we picked him. We have seen the progress that he has made,” Gibson said.

“Hasan has been with us probably for the last 12 months since Pakistan-tour last year. We have seen him develop nicely. So it was good that he got his opportunity. Three wickets in his debut match is a good reward for the hard work that he has been putting in,” he added.

Gibson however pinned high hopes on Hasan after seeing an enormous talent in him. According to him, Hasan is the one, who could go from strength to strength.

“He has worked really hard. Good to work with. He is fun to work with. We have tried to get the ball swinging back. We have worked on many different things with his wrist position. When he gets it right, he has proved it to himself that he can swing it back in. Hopefully he will go from strength to strength and get better. More balls, in coming matches, you will see swinging back in,” Gibson added.

Gibson admitted that Bangladesh’s performance in the first match was not an ideal one but still it is good to start with a winning note.

“I think it was a good team performance. Conditions weren’t ideal. I guess the way the pitch spun, but we had all bases covered with the team we had.

I thought Fizz and Rubel bowled really well up front, and then Hasan Mahmud had a fantastic debut. It wasn’t an ideal performance but it was a good way to start, with a victory,” he remarked.

Gibson, the former player from West Indies also had good wish for his country.

“Phil Simmons is a very good coach. He is missing a lot of his experienced players. If everybody was available, some of them might not be here now to play international cricket. It is an opportunity for the young players in this team. I think there were about six debuts in that team. It is obviously going to be tough in these conditions. But building a team takes time,” he concluded.