PM to inaugurate distribution of the houses 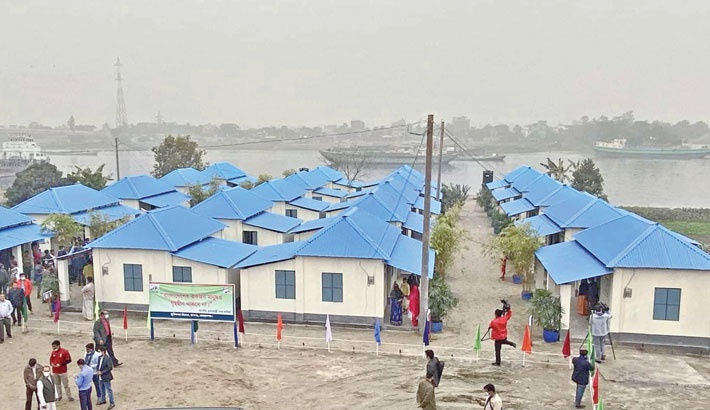 As part of the noble initiative taken by Prime Minister Sheikh Hasina to rehabilitate all the homeless and destitute by the Mujib Barsho, around 70,000 hapless families are going to get homes of their own on Saturday.

Under the initiative, some 69,904 destitute families across the country will receive their permanent houses from the prime minister under the Ashrayan-2 project.

She will inaugurate the distribution of the houses virtually from her official residence Ganobhaban at 10:30am on the day.

It is a unique example in the world that Sheikh Hasina’s government is going to rehabilitate a huge number of landless and homeless families at a time with housing facilities.

Ashrayan-2 Project Director Md Mahbub Hossain told the Daily Sun that around 70,000 houses will be handed over among the homeless and destitute people in the first phase.

“The process to construct 1 lakh more houses under the project will begin by the next one month and efforts will continue until every destitute gets a house,” he said.

Sources say as part of the government’s commitment that every homeless will get home during the Mujib Borsha marking the birth centenary of Father of the Nation Bangabandhu Sheikh Mujibur Rahman, the houses are being provided for the poor people.

The government prepared a list of nearly 9 lakh families in 2020 to provide them with houses during the Mujib Borsha.

Besides, Ashrayan project rehabilitated 3,715 families by constructing 743 barracks under 44 project villages in 36 upazilas in 21 districts during the Mujib Borsha.

Earlier, some 44,00 environmental migrant families got a flat each as the government has been running the biggest-ever modern shelter project in Cox’s Bazar to rehabilitate the climate victims under the ‘Khurushkul Bishesh Ashrayan Prakalpa-2’.

The project, implemented on 253.59 acres of land at a cost of Tk 1800.39 crore, has four specific zones, featuring an exquisite tower named after Sheikh Hasina along with tourist site, lovely playgrounds and ponds. It is one of the biggest projects for the climate refugees in the world.

The project was a gift for the climate refugees, who were forced to flee due to sudden or gradual alterations in the natural environment.

After the country’s independence, Bangabandhu first took the initiative to rehabilitate the landless, homeless and destitute people.

After assuming office in 1996, Sheikh Hasina, also the eldest daughter of Bangabandhu, followed his footstep taking projects for the cyclone victims in 1997.

In 2014-2015 fiscal year, she took the ‘Khurushkul Bishesh Ashrayan Prakalpa-2’ which has 139 five-storey buildings.