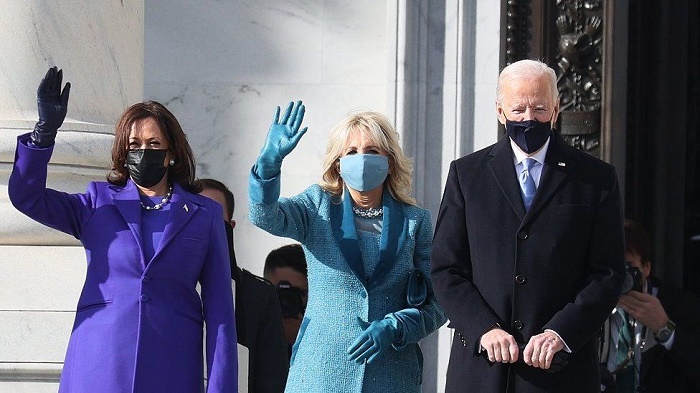 President Joe Biden used his inaugural speech to send a message to the rest of the world about the US.

"Here's my message to those beyond our borders. America has been tested, and we've come out stronger for it. We will repair our alliances and engage with the world once again," he said, vowing a change from the isolationist policies of his predecessor.

"We'll lead, not merely by the example of our power, but by the power of our example. We'll be a strong and trusted partner for peace, progress and security," he added.

Many European leaders have tweeted their congratulations to the new administration and expressed their optimism at working together.

Biden: We have "much to repair, much to restore, much to heal"

Newly minted President Joe Biden referenced the current plight of America during his inaugural address, noting that the country has "much to repair, much to restore, much to heal, much to build, and much to gain."

As the coronavirus American death toll surpassed 400,000 this week, Biden noted that "few people in our nation's history have been more challenged or found a time more challenging or difficult than the time we're in now."

Speaking specifically of the Covid-19 pandemic, Biden referenced a "once-in-a-century virus, that silently stalks the country. It's taken as many lives in one year as America lost in all of World War II."

But amid tones of pain and strife, as "millions of jobs have been lost," and there exists a "cry for racial justice some 400 years in the making," Biden offered signs of hope.

"To overcome these challenges, to restore the soul and secure the future of America, requires so much more than words. It requires the most elusive of all things in a democracy: unity."

Joe Biden just became became the 46th President of the United States. He is the 15th vice president who later became president.

He is only the second, along with Richard Nixon, to have a gap between serving as vice president and being elected president.

Here's a breakdown of how vice presidents first became president:

•           8 vice presidents were first elevated because the sitting president died.

•           1 vice president was elevated because the sitting president resigned.

•           Gerald R. Ford is the only person to serve as both president and vice president who was never elected to either office.

In his inaugural speech as the President of United States of America, Joe Biden called for a fresh start as the country experiences "historic moment of crisis and challenge."

"For without unity, there is no peace, only bitterness and fury. No progress, only exhausting outrage. No nation, only a state of chaos. This is our historic moment of crisis and challenge, and unity is the path forward," he said. "Hear one another. See one another. Show respect to one another."

He discouraged against the culture of "total war" in policy-making and the manipulation of facts.

Evoking Dr. Martin Luther King Jr. and his famous speech, "I have a dream" and the women protesting for a right to vote, Biden sounded an optimistic note about change.

During his inaugural address, President Joe Biden asked Americans to hold their own moment of silence for the more than 400,000 people who have died during the coronavirus pandemic.

"In my first act as President, I'd like to ask you to join me in a moment of silent prayer to remember all of those who we lost this past year to the pandemic," Biden said.

"Those 400,000 fellow Americans — moms, dads, husbands, wives, sons, daughters, friends, neighbors and coworkers. We'll honor them and become the people and nation we know we can and should be," Biden continued.