Departing Trump gets his parade but little love 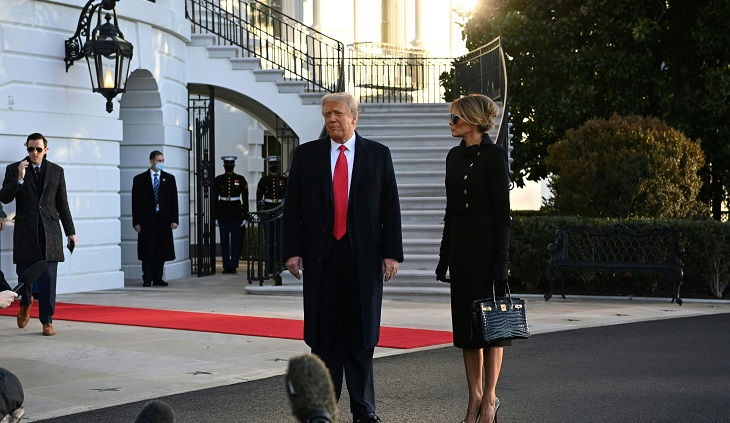 Donald Trump wanted a hero's send off Wednesday and the ceremony arranged for him at an Air Force Base outside Washington looked just like one. But one thing was missing: the big crowd he loves.

With less than four hours left before Joe Biden took over, Trump had to rush to make his exit from the White House to Florida before losing the trappings of the presidency.

So after an 8:18 am departure on Marine One from the South Lawn, he landed at Joint Base Andrews alongside the gleaming presidential Boeing 747 -- Air Force One.

An Air Force band played "Hail to the Chief." And black army field guns fired off a 21 gun salute.

But for all the military precision the one thing Trump loves most of all -- enormous, adoring crowds chanting "We love Trump!" -- was missing.

About 500 fans turned out in the icy wind, standing in a fenced off area in front of the stage. Half of the section remained glaringly empty.

"We have the greatest country in the world," Trump said in a short address that sounded a lot like his campaign speeches, except that it was now a goodbye.

"It was my greatest honor and privilege to be your president," he said. "Have a good life."

Ignore the small crowd and the occasion might have resembled something honoring a leader at the height of his powers, not a defeated one-term president with the unique distinction of facing an impeachment trial after he's gone.

But looking closer, not everything quite clicked with the message Trump -- who makes a point of mocking "losers" -- wanted to send.

The awkwardness of gathering at a windswept base in the Washington suburbs at breakfast time was the first clue.

Trump had no choice, not if he wanted all the presidential toys: the clock was running down to the moment when he'd have to give them back.

So he needed literally every minute to make it in Air Force One to Florida and still have use of the presidential motorcade to reach his golf club residence in Palm Beach before the clock struck 12.

In a bid to boost crowd numbers, the White House cast its net wide when it sent out invitations.

Individual invitees reportedly were told they could bring up to five friends.

One invite even made it to Anthony Scaramucci, who was fired from the post of communications director after working just 11 days at the start of Trump's term, then turned into a caustic television critic of the president.

"Trust me, that had to be a mass email if one of them got sent to me," he told the Inside Edition TV show.

A lot of big names, far bigger than the colorful Scaramucci, also got invites and also said no.

Vice President Mike Pence, the picture of loyalty to Trump for the last four years, issued his public schedule for Wednesday early the day before.

The one item on the otherwise blank page spoke volumes:

"11:00AM. THE VICE PRESIDENT and THE SECOND LADY attend the 59th Inaugural Ceremonies."

Pence wasn't attending his old boss' departure because he was going to be at the new president's arrival.

The widely respected former Trump chief of staff and a retired Marine general, John Kelly, was invited -- even if he had also turned into a very public, biting critic.

Kelly told CNN he had other engagements.

Two big beasts of Congress -- loyal Trump supporters senior Senate Republican Mitch McConnell and his House of Representatives counterpart Kevin McCarthy -- had yet another excuse: they'd accepted an invitation to attend church with Biden that morning.

A red carpet led across the military runway to the steps of Air Force One. For soon to be ex-president Trump, it was a long, cold walk.