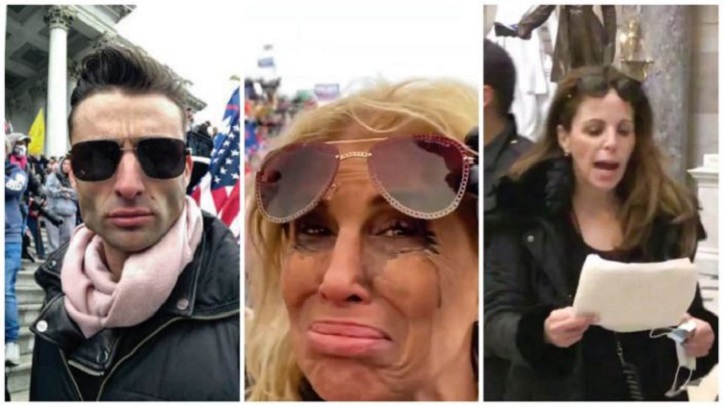 A Beverly Hills doctor who’s publicly criticized the coronavirus vaccine and advocated for hydroxychloroquine as a treatment against the deadly virus has been arrested in connection with the Capitol riots.

Dr. Simone Gold, 55, was among three Los Angeles residents who were arrested on Monday in connection with the insurrection. Gina Bisignano, the 52-year-old owner of Gina’s Eyelashes and Skincare, and 37-year-old John Strand are also facing charges.

Gold garnered national attention in July when she organized a press conference on the steps of the U.S. Supreme Court to condemn pandemic lockdowns and rave about how “hydroxychloroquine works” as a treatment for COVID-19.

‘I Am Such an Instigator’: Oath Keeper Leader Charged With Conspiracy in Capitol Riots

The doctor made a similar speech during the Jan. 6 insurrection, confirming to The Washington Post she was photographed holding a megaphone on the Rotunda floor. (In June, the FDA revoked its emergency authorization of hydroxychloroquine, stating the drug could actually do more harm than good because of its “ongoing serious cardiac adverse events and other potentially serious side effects.”)

According to a criminal complaint filed against Gold and Strand, federal authorities were tipped off to the pair's attendance by The Washington Post article.

In a 30-second video, Gold can be seen speaking in the Rotunda while two police officers stand behind her, gesturing at her and others to leave. While most of her speech is inaudible in the video, Gold can be heard saying “I’m a mom” and “massive medical establishment.”

“I can certainly speak to the place that I was, and it most emphatically was not a riot,” Gold told the Post, adding she gave the same speech during a Jan. 5 rally for Trump supporters. “Where I was, was incredibly peaceful.”

Gold said she does “regret being there,” as her presence at the riots will distract from her work for America’s Frontline Doctors, a group that’s pushed misinformation about COVID-19 and the vaccine. Five people died and dozens were injured during the riots, as thousands of MAGA supporters stormed the Capitol and forced elected leaders to go into hiding for hours.

Gold also admitted she went to the Jan. 6 event with Strand, the communications director for America’s Frontline Doctors. Strand and Gold were pictured in a photo circulated by the FBI. The doctor told the Post she was fired from her job as an emergency room physician for two hospitals in July after her speech—and has not worked as a medical professional since.

The complaint states federal authorities received many tips that the pair participated in the riots, including several photos of them inside the Capitol building.

One witness told authorities that “an old acquaintance was posting pictures of himself taking over the capitol yesterday. He was calling for a revolution on his social media accounts…[i]ndividual broke into the capital building and is paid to promote propaganda on his website.”

In a photo posted to a Twitter account associated with Strand, he’s pictured in front of the Capitol steps during the riot. “I am incredibly proud to be a patriot today, to stand up tall in defense of liberty & the Constitution, to support Trump & #MAGAforever, & to send the message: WE ARE NEVER CONCEDING A STOLEN ELECTION,” a caption reads, according to the criminal complaint.

Gold and Strand are also in a Getty video with a large crowd “attempting to push past multiple officers blocking the entrance to the Capitol, which had visibly broken windows at the time,” the complaint says, adding, “One of the officers, who had been pinned near the doors to the Capitol, appears to be pulled down by someone in the crowd and lands near” the pair.

In a criminal complaint, prosecutors state they received six tips identifying Bisignano as a participant in the riots—an easy leap considering the salon owner stated her full name, place of residence, and Instagram handle in a video filmed in front of the Capitol. The feds added that throughout the insurrection, Bisignano was spotted wearing the same Louis Vuitton sweater.

According to the complaint, Bisignano stated the name of her business while speaking through a bullhorn to the crowd.

“Everybody, we need gas masks. We need weapons,” she shouted. “We need strong, angry patriots to help our boys, they don’t want to leave. We need protection.” As she’s speaking, rioters can be seen about 10 feet away assaulting officers trying to protect the Capitol—including one person caught on camera hitting an officer with a baseball bat.

Another video shows the salon owner “in a crowd of rioters struggling with police officers in a sallyport in an attempt to gain entry to the Capitol.”

In an interview with the Beverly Hills Courier, Bisignano admitted she went to the Capitol with one other person, “stating she felt called upon by President Donald Trump to travel to D.C. to change the outcome of the election, which she believes was stolen,” the complaint states.

Claiming she got “caught up” in the moment during the riots, Bisignano said she witnessed fighting during the siege—but insisted, without offering a shred of evidence, that the violence was “antifa and BLM.”