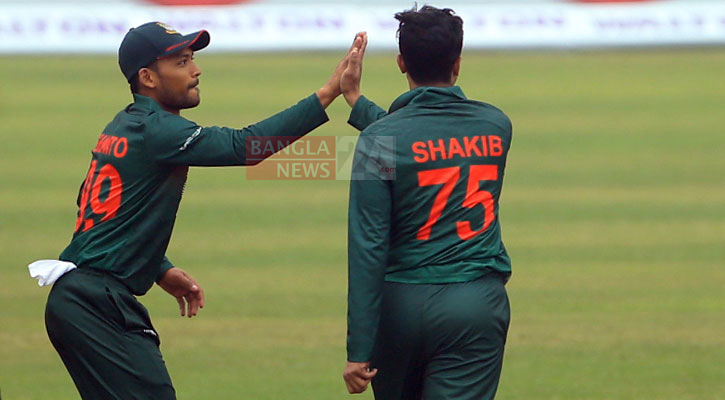 Shakib Al Hasan claimed 4-8 by producing a magnificent performance on his return to International cricket as Bangladesh shot West Indies out for paltry 122 in the first of the three-match ODI series at Sher-e-Bangla National Cricket Stadium on Wednesday.

He was ably supported by fast bowlers duo Mustafizur Rahman and debutant Hasan Mahmud who hit the ball in good areas continuously to leave the visitors in dazed state.

Rain put a brake on the game for about an hour after Bangladesh put West Indies, playing with six ODI debutants, in batting.

Mustafizur broke through with the wicket of opener Sunil Ambris (7), one of the most experienced players in this vastly inexperienced side before the rain break, with the Caribbean at 15-1.

After the game resumed, Mustafizur again was rewarded for his tight length, dismissing Joshua Da Silva (9), caught beautifully at gully by Liton Das.

Shakib Al Hasan then appeared in the stage, bowled seven overs in a row to cut through the middle order as West Indies lost three wickets for just 11 runs.

Kyle Mayers resisted and got Rovman Powell in his company, showing West Indies a glimmer of hope against the adversities.

Powell even struck Mustafizur Rahman a six through mid-wicket to make his intentions clear.

But Hasan Mahmud further put West Indies in trouble with a double strike, that saw him taking the outside edge of Powell for 28 for his debut wicket before trapping Raymon Reifer in immediate next delivery for naught.

Mayers after scoring the team’s highest 40, was undone by a Mehidy Hasan Miraz delivery that spun sharply.

His dismissal effectively routed West Indies’ way to score a good total on the board.

Shakib and Hasan Mahmud then cleaned up the tail to give Bangladeshi batsmen a small total to chase.