CPA hands over land to MMD for developing office building 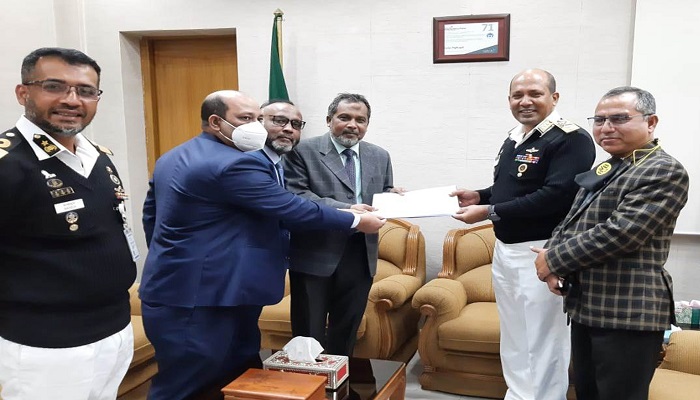 Chattogram Port Authority (CPA) has handed over a land of 5.58 khatas for developing office building of the Mercantile Marine Department (MMD), Chattogram.

MMD will develop their office building on the land located near the Jetty No-1 of Bangla Bazar area.

Director General (DG) of Department of Shipping, Dhaka Commodore AZM Jalal Uddin and its Chief Engineer and Ship Surveyor M Manjurul Kabir were present at the land handing over programme among others.

MMD Principal Officer Captain Md Giashuddin Ahmed told the daily sun that they expect to start the construction works of the office building after getting allocation in the upcoming budget.

Other necessary works including soil test, survey and designs will be conducted within the period, he said.

The principle officer hoped that official activities will be accelerated further after getting the sufficient space at the new building.

Sources at the MMD said the land handing could be done following sincere efforts by the MMD Principal Officer Captain Giashuddin.

He has also been continuing his efforts to complete the incomplete works in coordination of the concerned ministries after joining as the principle officer.

The revenue earning, survey and registration of the fishing boat, cargo boat, fishing trawler, tanker, cargo and container vessels, passenger ship and Bangladeshi-flagged ocean going vessel have also been increased several times due to his relentless efforts, they said.

In continuation of materialising the dream of developing 'Digital Bangladesh,' all services of the department have been digitised.

Giashuddin has also been working to free the government land worth hundreds crore at the city’s Mogotuli mouza while recovered the land of Principal Officers’ Bungalow, near hotel ‘Radisson Blu Chattogram Bay view.’

Works for developing modern Marine House Complex at the place are going on in full swing, said the sources.

He also played important role for getting compensation by the family members of the crews who died in different ship accidents in the Bay of Bengal due to cyclone and tidal surge, they said.

The transparency, accountability and pace of works have been increased significantly under his leadership at the department, they added.