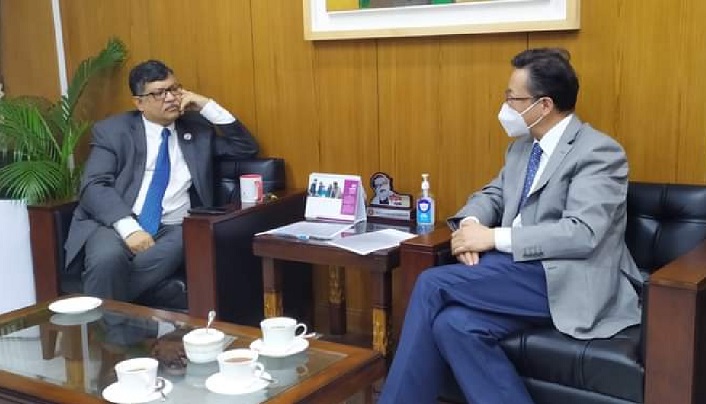 On the eve of discussions between Bangladesh and Myanmar on resolving the Rohingya refugee crisis, China, which provides the 'tripartite' framework  to the dialogue, said it will continue to support the other two countries to find an early and durable solution.

China also assured that it will promote peace, development and prosperity in the region.

The two sides also discussed the tripartite meeting to be held on Tuesday (today).

Bangladesh, Myanmar and China will hold a tripartite meeting virtually on Tuesday to discuss ways to expedite the Rohingya repatriation process.

The repatriation talks with Myanmar remained halted for nearly a year due to COVID-19 pandemic and general elections in Myanmar.

Foreign Secretary Masud Bin Momen will lead the Bangladesh delegation in the virtual meeting that is scheduled to begin at 2pm.

Vice Minister of China Luo Zhaohui will virtually join the meeting from Beijing with Bangladesh and Myanmar delegations, a senior official told UNB.

The international community finds the repatriation of Rohingyas to Myanmar as the only solution to the crisis while Bangladesh wants to begin repatriation as soon as possible.

Bangladesh and China will share their ideas with Myanmar in the meeting to expedite the repatriation process.

Earlier, Foreign Minister Dr AK Abdul Momen said Bangladesh has handed over a list of 840,000 Rohingyas to Myanmar for verification.

Dr Momen said they are doing their part but Myanmar is not helping the same way. He said he is always hopeful of beginning repatriation as history says they took back their nationals in 1978 and 1992.

Bangladesh is trying in multiple ways - bilaterally, multilaterally, tri-laterally and through the judicial system – to find a lasting solution to the Rohingya crisis.

Bangladesh and Myanmar signed the repatriation deal on November 23, 2017. They then signed a document on “Physical Arrangement”, which was supposed to facilitate the return of Rohingyas to their homeland. But repatriation attempts failed twice in November 2018 and August 2019 - clearly amid Rohingyas' "lack of trust" in  the Myanmar government that things would be any different were they to return.

Subsequently during the 74th UNGA  held in September, 2019 in New York, China took the initiative  to propose the tripartite framework with their presence  largely in an overseeing role, that can nevertheless hold both sides to account on their respective commitments to each other. The Bangladesh side had already complained of Myanmar acting in 'bad faith' during negotiations, whereby they never had any intention of taking the Rohingya back, and was only meeting to keep up appearances.

However soon after a meeting of the trio on January 20, 2020, the coronavirus lockdowns started taking effect in different parts of the world.